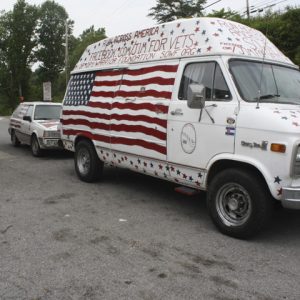 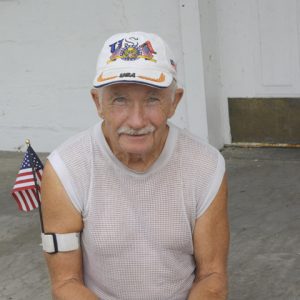 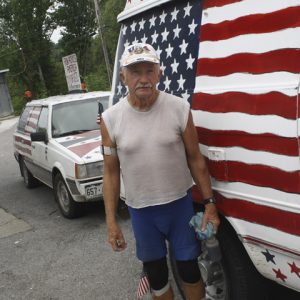 Jim Shiew is running across America, and last week, he tipped the pedometer at just over 2,800 miles as he ran through McCreary County.
His run to raise awareness and funds for the non-profit Special Warriors Operation Foundation based in Tampa, Florida is interesting in itself, but Jim, who will be seventy years old in December, has managed to add a new twist to his journey.
Jim, in addition to carrying himself from the Pacific to the Atlantic as he runs in his Hoka running shoes, is also simultaneously driving two vehicles across the nation.
Yep, that’s right.  A few miles at a time, Jim Shiew is pounding the pavement by foot and driving his patriotically decorated 1978 Chevrolet van and his 1985 Subaru station wagon all the way across the U. S. of A.
Jim’s unorthodox approach allows him to run solo by driving his van eastward for two to four miles, parking it, and then running back westward to pick up his car and driving it forward to the waiting van.  Jim repeats the process several times in a day until he travels a total of twelve to fifteen miles.  He then uses the van to tow his car to stopover destinations.  When he is ready to resume his official run, he tows the car back to the stopping point on his original route and begins the process anew.
The Army veteran is now on the second leg of his journey.  The first part took Jim from his hometown of Buena Vista, Colorado to Solana Beach, California where he waded in the Pacific.  From that wading spot in the Pacific, Jim began his solitary trek across America-driving East and running West-with the ultimate goal of dipping his toes in the water of the Atlantic at Virginia Beach, Virginia by late September or mid-October.   Once completed, Jim’s run will total more than 3,300 miles.
Shiew chose to support the Special Warriors Operation Foundation because he has a special place in his heart for veterans.
“I’ve always been a patriot,” Shiew explained.  “I think our veterans get a bad deal much of the time.  The guys who were in Vietnam and many veterans today get treated terrible.  If it weren’t for a lot of the non-profit, charitable organizations that help veterans, many would be left out in the cold.”
Shiew travelled through McCreary County via HWY 92 from Wayne County and made it as far as the former Roger New Grocery at Hilltop in the Smithtown area before stopping to camp in his van for two nights in Stearns with the American Legion Legion Post 115 facility providing a parking spot and electrical hook-up to his van.
Departing Stearns early on Saturday morning, Jim once again began his journey, still running west and driving east, via HWY 92 through Pine Knot on his way to the ocean.
Those who would like to read more about Jim’s run or who wish to support Jim or the Special Warriors Operation Foundation can go to Facebook.com/JimforVets.