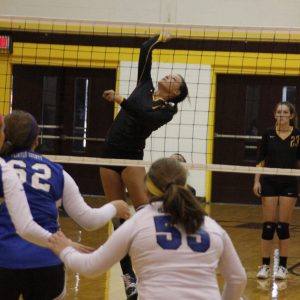 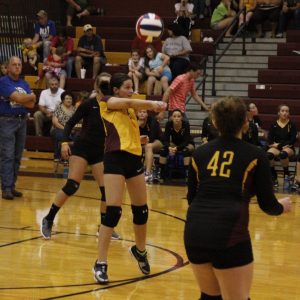 It was a nail-biting way to kick of the season, but the Lady Raiders’ Volleyball team couldn’t pull off one last comeback and fell to Clinton County Tuesday night.
In the best of five match McCreary rallied from an 11-1 deficit to a 25-22 win in the first game before dropping the next two.
Seeming to hit their stride, the Lady Raiders cruised to a 25-15 win in the fourth game, forcing a deciding game 5. McCreary grabbed control of the final game early, but the Lady Bulldogs closed out the game on a 5-0 run for a 15-13 win and took the match with a 3-2 record overall.
Losing eight seniors from last year’s squad, the Lady Raiders have restocked with some new faces on the varsity roster, and it may take some time for the team to find its groove.
“I thought we did pretty good for our first time out,” Coach Robert Jones said after the match. “We are relatively young team with not a whole lot of Varsity experience.”
“We were able to get everyone into a game at some point tonight and give them the opportunity to show us what they can do. It will be a learning process through the first few weeks. We will try different combinations of players to find the right formula on the floor.”
“This was only our first game, while it was Clinton County’s third (including a scrimmage), and we were right there with them through most of the match.”
The inexperience showed in the first match as McCreary struggled to get consistent play, especially in their serving and passing games.
Of 100 serve attempts McCreary committed 17 errors, leading to easy Clinton County points.
“Our serves need improvement, that’s for sure,” Jones said. “We gave up way too many into the net or out of bounds. In a close match you have to try and get every serve into play to allow a chance to score.”
Emily Howard, Megan Watters and Paige Neal are three returning starters for McCreary, and combined for the bulk of the front-line attacks Tuesday night. The trio accounted for 54 of the 79 total attacks, and came away with 17 kills. The rest of the team accounted for only five more kills in the match.

The Lady Raiders are back in action tonight when they host Bell County, and they will also host the annual McCreary Central Invitational Tournament this Saturday. The field will include Bell County, Clinton County, Somerset and Jellico. The first game, McCreary vs. Bell is scheduled to begin at 10 a.m.