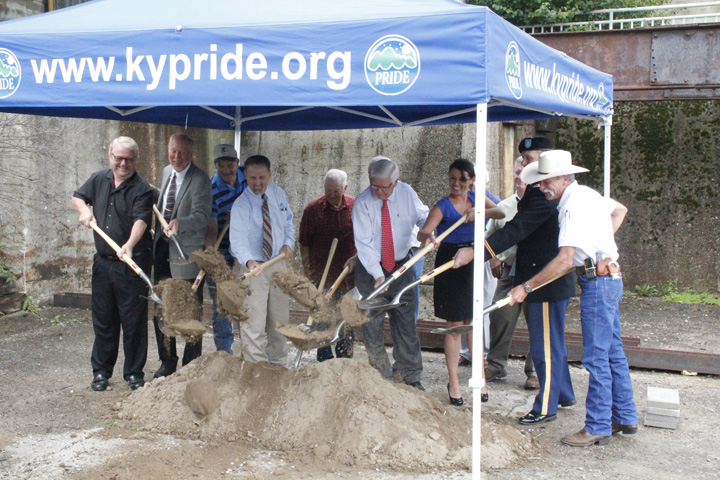 Photo by Greg Bird
Congressman Hal Rogers announced a new sewer expansion project in Stearns Monday morning, and also awarded the PRIDE Volunteer of the Month award to the McCreary County Girl Scouts for their efforts during the Spring Cleanup.

Congressman Harold “Hal” Rogers visited McCreary County to take part in two special events Monday.
The first was a groundbreaking ceremony for a new sewer expansion project in Stearns and Revelo.
The project, estimated to cost approximately $700,000 will provide service to about 90 homes in the community.
Joined by McCreary County Water District Manager Steve Owens and Colonel Leon Parrott, Commander of the U.S. Army Corps of Engineers Huntington District at the Heritage Hall in Stearns, Rogers announced the project, which will focus on Bridge Fork Pond, Pine Ridge, Gene Jones and Newtown Roads, should be completed by August 2016.
“Providing clean water and sanitary sewer to families across southern and eastern Kentucky continues to be one of my top priorities,” said Rogers. “I’m so proud of the work that the U.S. Army Corps of Engineers, our Water and Sewer Districts and our Area Development Districts have teamed up to do over the last 17 years with PRIDE.”
“I applaud Steve Owens and the McCreary Water District for their commitment to improving the lives of the residents of McCreary County,” said Tammie Wilson, CEO of Eastern Kentucky PRIDE. “I look forward to partnering with them and the Corp of Engineers to see this project completed.” 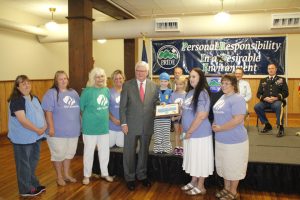 The Congressman also used the event to honor the McCreary County Girl Scouts for their volunteer efforts during the PRIDE Spring Cleanup Month this past April by naming them the PRIDE Volunteer of the Month.
“The McCreary County Girl Scouts are always among the first to volunteer each year for the PRIDE Cumberland Falls Spring Clean-up and the McCreary County U.S. 27 Clean Sweep,” said Rogers. “Additionally, they help keep our state parks, the county park, and our Forest Service campgrounds clean. So next time, folks are at the park or the campground, I hope they think about our Girl Scouts before they decide to litter again. I’m so proud of the example they are setting for all generations.” 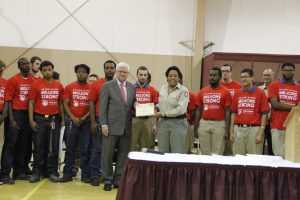 In McCreary County, PRIDE volunteers have cleaned up 51 illegal dumps, cleaned 866 miles of roadway, removed some 10,000 old appliances, collected nearly 30,000 old tires and 6,000 pounds of recycling.
Following the groundbreaking, Rogers visited the Pine Knot Job Corps Center to participate in the kick-off ceremony honoring the 50-year anniversary of the Job Corps Project.
Joining Forest Service National Office Director Tina Terrell and Center Director Brandon Pfelmeier, Congressman Rogers praised the Job Corps for not only providing an education to the young men and women who take part of the program, but for also providing a valuable service to the community.