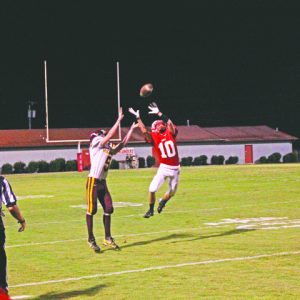 The Raiders fell victim to seven turnovers Friday, including this pass that was picked off. 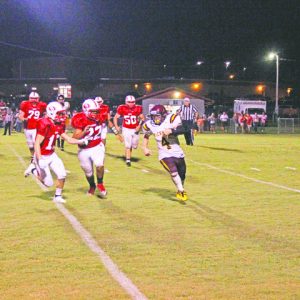 The Raiders’ Brandon Troxell looks for an opening against a swarm of Scott County defenders Friday night. 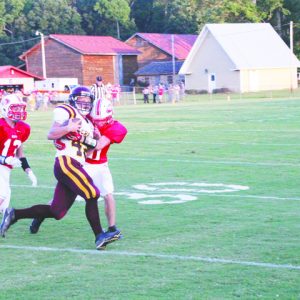 Troxell fights to pick up yardage.

The Raiders had a tough draw for their opening game of the 2014 season, but it at least gave the McCreary team an idea of the direction they want to head.

Kicking off the season in Scott County, the Raiders were handed a 63-0 loss at the hands of the Highlanders, a near repeat of last year’s 61-0 score.

Scott County, who finished last year with a 7-3 record, were just as tough as expected. Returning nearly every starter from last season on both offense and defense, the Highlanders were bigger, stronger, faster and more experienced than their neighbors across the border.

Where that Scott County defensive speed really showed was in the running game. On 29 total carries by McCreary rushers, only 13 were for positive gains, and the Raiders finished with -31 rushing yards on the night with four fumbles lost.

The McCreary passing game showed some promise as James Gregory and Ryan Jones combined for 116 passing yards on 11 completions in 26 attempts. Three passes were intercepted by Scott County for a total of 7 turnovers by the Raiders.

Scott County set the tone early, scoring on their first possession on two big plays by Mark Karkuah. The Highlander senior broke off a 20-yard gain on the first play, then caught a 43-yard touchdown pass to put Scott County ahead 7-0 within the first 20 seconds of the game.

The Raiders’ first possession started at their own 20 after a touchback on the kickoff, but the team was backed up to their own 1 at the end of the series thanks to 2 sacks and an offensive penalty. Facing 4th and long, McCreary set up to punt, but the attempt was blocked and Scott County recovered the ball on their own 3.

McCreary’s next series ended with their first turnover of the night, and led to another Highlander score.

Facing another 4th-and long, the Raiders attempted a fake punt, but the Scott County defense didn’t bite and chased quarterback James Gregory down in the backfield. Gregory lost control of the ball near the goal line and a Highlander defender picked up the ball and ran it in for a score.

Scott would punch the ball in twice more in the first quarter and took a 34-0 lead after the first 12 minutes.

After a quick score on the opening play of the second quarter, followed quickly by a 30-yard interception return for a touchdown for a 46-0 lead with 10:51 left in the first half, the competition clock rule took effect and would run continuously for the rest of the game.

Down 53-0 with about 8 minutes to go in the half the Raiders embarked on one of their longest drives of the night. Starting at their own 20 McCreary put together an 11-play drive, advancing all the way to the Scott County 17 before the clock ran out to end the half.

Scott would only add two scores in the second half, a five-yard run and a 35-yard field goal to take a 63-0 lead.

On their final possession the Raiders had perhaps their best opportunity to score as they marched down the field as time was running out. McCreary faced first and goal at the Highlander 8-yard line with just over a minute remaining, but a bad snap resulted in a fumble, recovered by Scott County – effectively ending the game.

Next week McCreary will travel to Letcher County Central to take on the 1-0 Cougars, who are coming off a 30-0 win over Berea last Friday night. In 2013 the Cougars defeated the Raiders 56-0.