Megan Watters on the attack. 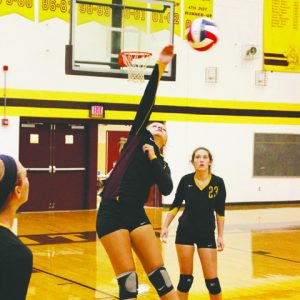 Katie Hamlin takes a shot across the net.

Aryn Stephens gears up for an assist.

The Lady Raiders Volleyball team is off to a strong start in the young season, winning 4 of their first six matches, including taking the title in the McCreary Central Invitational Saturday.

After a tough loss to Clinton County to start the season, McCreary rebounded with a 3-0 win over Bell County Thursday night.

At the 4-team invitational tourney (Jellico was a last-minute drop out due to transportation issues) the Lady Raiders defeated Somerset 3-1 and Bell County 3-0, only to fall once again to Clinton County 2-3. Due to Somerset’s 3-0 win over Clinton in the tournament, both the Lady Raiders and Lady Bulldogs finished with identical records, but McCreary had one fewer overall loss, giving them the win thanks to the tie-breaker.

McCreary traveled to Jellico Tuesday night for their first road game of the season, taking care of business with a 2-0 win to improve their season record to 4-2.

In the first set of the night the Lady Raiders struggled to get on track, trailing throughout most of the game. Facing a 2-point deficit, Coach Robert Jones called for a time out to rally the team.

After the break Senior Katie Hamlin took the serve and rolled off 9-straight attempts for points, her final one falling for an ace and a 25-18 win.

In the second set McCreary performed better, but still had trouble putting together a solid run until Sophomore Aryn Stephens went to the service line with a 17-14 lead. Stephens nearly repeated Hamlin’s feat, putting up 8-consecutive serves for points to close out the match with a 25-14 win.