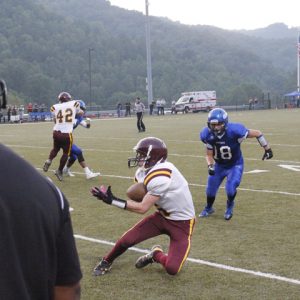 James Gregory catches a pass for a first down in the Raiders’ 53-0 loss to Letcher County Central Friday night. 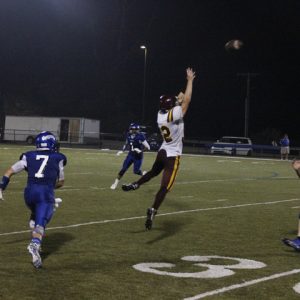 A long road trip for the McCreary Central football team didn’t bear fruit for the Raiders as they were handed their second loss in the young season – suffering a 53-0 defeat to the Letcher County Central Cougars at Pine Mountain Friday night.

Traveling over 2 and a half hours to Whitesburg, the Raiders were hoping to fine-tune their offense and break the goal line for the first time after being shut-out in their opening game against Scott County last week.

McCreary’s offense again featured a pass-heavy playbook, as the Raider coaching staff apparently wants to get the Raiders’ aerial attack in gear before starting District play in less than a month.

McCreary quaterbacks threw a total of 39 passes Friday night, compared to only 15 rush attempts. The Raiders gained 94 yards in the air, and only 15 on the ground.

Freshman quarterback Ryan Jones was heavily pressured by the Cougar defense all game, and struggled to get clean pass attempts all night, completing only 8 of 38 attempts for 73 yards. James Gregory, who took a direct snap on a fake punt attempt, completed his only pass attempt on the night for a 21-yard gain and a first down.

The Raiders managed eight first downs in the contest, but five came as a result of Letcher penalties.

Letcher County wasted little time getting on the scoreboard, completing a 50-yard screen pass on the second play of the night to take a 6-0 lead.

After a McCreary punt on their first possession, the Cougars coughed the ball up at the Raiders’ 21 thanks to an interception, but McCreary couldn’t capitalize on the turnover and turned the ball over on downs after gaining only 8 yards in four plays.

Facing fourth and long, Jones dropped back to pass, but the Cougar rush was all over the beleaguered qb and he was forced to throw the ball away to prevent a sack and a huge loss on the play.

Letcher took over near midfield, and aided by a pass interference and unsportsman-like conduct penalty against McCreary, would take a 3-touchdown lead with a 4-yard rush with 1:32 left to play in the first quarter.

In the second period of play the Raiders started to put together some positive offense, but suffered some losses on the offensive end.

Letcher opened the quarter with another touchdown, followed by a fifth score after a McCreary punt.

In their second possession, the Raiders embarked on a drive that crossed midfield for the first time in the game, but receivers Jake Gregory and Nathan Goins suffered injuries that took them out of the game.

On the final play of the drive, McCreary was facing a fourth and 15 when Goins attempted to grab a pass when he was sandwiched between two defenders then hit hard by a third, dropping him to the ground in pain.

The Cougars would score twice more in the half, taking a 47-0 lead into halftime.

With a running clock throughout the second half, the Raiders opening drive was buoyed by two personal foul penalties against Letcher, moving the ball to the Cougars’ side of the field, but it ultimately stalled when a Jones pass was intercepted at the 24.

McCreary managed to stop Letcher from scoring and forcing a punt.

As the fourth quarter began, officials halted the game due to lightning being spotted in the area, and both teams went to the locker room to wait out the delay.

40 minutes later play resumed as the Raiders tried to sneak in a score before time ran out.

Their first drive ended with a turnover on downs, but the Cougars couldn’t move the ball in their own right, giving it back to McCreary on the 19.

The Raiders advanced to near midfield again, but a fumbled snap on fourth down resulted in a sack and a turnover on downs.

The Cougars, not content to just run the final two minutes of clock off and end the game, scored on a 36-yard run from their freshman quarterback. The young hurler broke free of two would-be tacklers in the back field, then slipped past several other defenders past the line of scrimmage as he made his way to the goal for the final score of the game.

The Raiders will try to snap their 19-game losing streak, dating back to 2012, this week when they travel to Clinton County to take on the 1-1 Bulldogs. Clinton County is coming off a 26-20 win over Trimble County last Friday night.