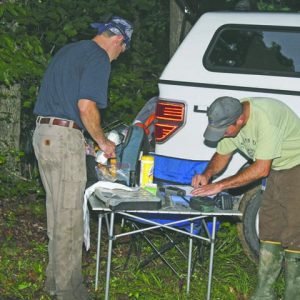 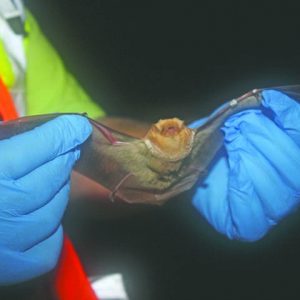 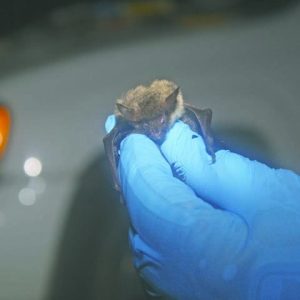 The Northern Bat will be federally listed as endangered later this year. 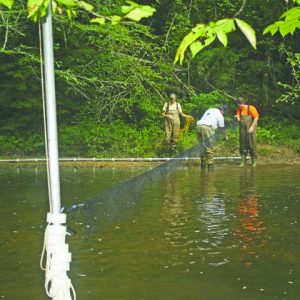 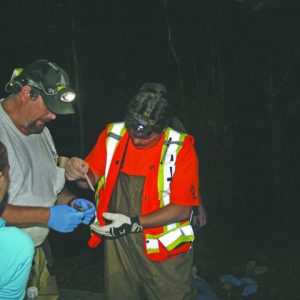 Biologists James Kiser and Joe Metzmeier examine an Eastern Red Bat before releasing it back into the wild. 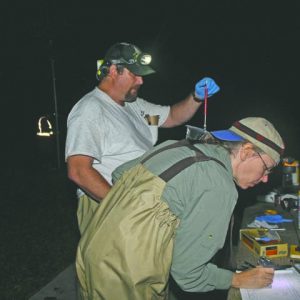 It’s really tough being a bat.  After all, life is rough enough when you’re a mammal just trying to survive on this planet we call Earth.  However when it comes to furry, night-time loving bats, one has to deal with all of the batty rumors flying around that associate the tiny creatures with vampires, sucking blood, and being rampant carriers of the deadly rabies disease.  It’s definitely a public relations nightmare!

The coordinated effort, designed to survey bats existing in specific areas in just two to three days, provided a wealth of information about the highly beneficial creatures which, regrettably, are also one of the most misunderstood and feared groups of animals.

After being briefed about safety, the McCreary County group traveled to some of the most secluded portions of the Daniel Boone National Forest to net, observe, and collect data from some of Kentucky’s unique, nocturnal creatures.  Over a period of two nights, four McCreary County sites were netted and surveyed.

As daylight gave way to darkness, the biologists’ efforts were rewarded as bats began to fly in to the nets.  Having prior bat experience and valid rabies vaccinations, biologists carefully removed bats from the nets and deftly charted information including species, gender, weight, forearm measurements, and health indicators. Before being released back in to the wild, each bat was tagged with a numbered ID band and examined for indicators of White Nose Syndrome, a fungal disease that has been killing bats across North America and Canada with mortality rates of 90-100% in some cases.  As of January 2012, the U. S. Fish and Wildlife Service estimated at least 5.7 to 6.7 million bats had died from the disease.

After examining each bat, biologists were extremely careful to avoid any possible spread of White Nose Syndrome by changing the disposable gloves worn over their work gloves, using disinfectant, and ensuring all equipment was cleaned upon completion of each bat examination.

During the two night McCreary County mini bat blitz, a total of nineteen bats and five different species were netted and surveyed.  Species included the Big Brown Bat, Eastern Red Bat, Eastern Pipistrelle (Pip) Bat, Evening Bat, and the Northern Bat.  The Northern Bat is a candidate for federal listing as an endangered species.  Its listing is expected at the end of this year.

Although those observing the blitz were not allowed to touch the bats and avoided getting too close to the bats’ tiny, sharp teeth, most were amazed at the cuteness of the bats once they were viewed up close.

During both nights of the survey, biologists stressed the importance of Kentucky’s bats in the environment and shared pertinent information about the frequently misunderstood mammals.

As Kentucky’s only major predator of night-flying insects, bats are responsible for the reduction of several insects that extensively damage crops and act as cold-blooded parasites in humans.  Some estimates indicate that one gray bat can eat 1,000 mosquito-sized insects per hour making it possible for a single colony of several thousand bats to eat millions of insects every night and tons of insects per year.  Acting as chemical free pesticides, bats perform a valuable service to humans and help maintain balance in the ecosystem.

Despite common belief, bats in Kentucky do not suck blood, will not build nests in your hair, and do not contribute extensively to the spread of rabies. In fact, it is estimated that less than 1% of bats have rabies and the only way to contract rabies from a bat is to be bitten by an infected creature.

Also contrary to popular belief, bats are not blind.  Although, Kentucky bats typically use ultrasonic sounds (echolocation) to get around, they can see as well as many mammals their size.

Since bats are mammals, they share certain characteristics with humans.  Both are warm-blooded, have hair, and give birth to live young that first feed on milk.  Bats are the only mammals capable of sustained flight.

Although the red bat and some other species will give birth to up to four babies, most mother bats give birth to only one pup (baby bat) per year.  The babies are born blind, furless, and are totally dependent on their mothers.  The pups grow quickly and typically learn to fly within five weeks.  Bats typically live at least twenty to thirty years.

Bats travel and capture prey by emitting high frequency sounds from their mouths.  They can emit up to 200 pulses per second and analyze the echoes that bounce back to their ears off nearby objects.  Because the echolocation system of bats is so precise, they can detect and capture insects as small as gnats and travel through totally dark caves.

During the warm months of summer, colonies of bats live in a variety of habitats including trees, caves, cliffs, mines, bridges, barns, and houses.  The disappearance of most insects during the winter months forces a few species of Kentucky bats to migrate south; however, most hibernate in caves or abandoned mines where ideal temperatures allow the bats to slow their metabolisms for six months or more.  The bats survive on stored fat reserves during hibernation.  Most bats hibernating in caves return, year after year, to the same cave.  A few species of bats hibernate in tightly huddled groups to conserve energy.

Many populations of Kentucky bats have declined over the last few decades.  Regrettably, humans are a primary cause for the decline.  The use of pesticides, habitat loss, and the extermination of bats as pests have all taken a toll on Kentucky’s bat populations.  One of the greatest threats to bats from humans comes from human disturbance during hibernation.  Since many of Kentucky’s bats gather together in large numbers during hibernation, they are particularly vulnerable to disturbance at this time.  If bats are awakened during hibernation and use up their reserved fatty food supply, they cannot survive until warmer weather when they are once again able to capture insects for nourishment. As a preventive measurement, many caves where major populations of bats are known to hibernate are now gated to keep people out during key hibernation times.

Currently, the most alarming threat to bats comes in the form of White Nose Syndrome (WNS).  WNS is named for the white fungus often found growing on the muzzles, ears, and wings of infected hibernating bats.  Spreading quickly across the eastern U. S. and Canada after it was first discovered in New York in 2006, the disease was first documented in Kentucky in March of 2011.  Biologists and other scientists understand little about the disease but have determined that the fungus linked to WNS is especially suited for cold, humid cave environments.  Scientists believe affected bats are irritated by the skin infection resulting from the fungus and awaken from hibernation more frequently.  As a result, the bats use up their stored fat reserves.  At least eleven species of hibernating bats in the eastern U. S. have been affected or are at risk of the disease, including Kentucky’s three endangered species.

Because of the importance of bats in the environment, it is crucial to halt the decline of Kentucky bat populations.  There are several things one can do to help save the furry, winged bats of Kentucky including the following:  educating others with facts about bats and their benefits, remembering to remove unwanted bats humanely, avoiding any disturbance of hibernating bats, and erecting bat boxes to provide homes for bats.

The writer wishes to acknowledge the following sources of written information:  East Kentucky Power Cooperative and the Kentucky Bat Working Group website as contributed by the KY State Nature Preserves Commission and Kentucky Department of Fish and Wildlife