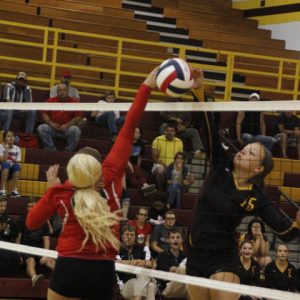 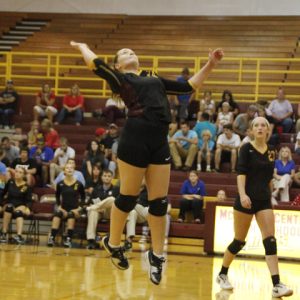 Katie Hamlin on the attack against Wayne County.

Twice the Lady Raiders forced extra points in their match against Wayne County last Thursday night, but they just couldn’t come out on top in either as they dropped their first District game of the season, 0-3.

McCreary and Wayne seemed about equal in the first two games of the best of five match, but the Lady Raiders were forced to pull off an incredible comeback in the deciding contest as the Lady Cardinals built a dominating lead early on.

The Lady Raiders led throughout most of the first game of the set, jumping out to a 6-1 lead, but couldn’t distance themselves from the Lady Cardinals whose quick attacks caught McCreary off guard several times.

Wayne County would tie the game at 19-19 and the two teams would trade points back and forth until a net penalty finally clinched the win for Wayne, 26-24.

The second game was more of the same as neither squad could gain an edge over the other. The Lady Cardinals finally broke through, closing out the game on an 8-4 run to win 25-21.

Wayne County pounded McCreary in the opening points of the third game of the match, opening up a nearly insurmountable 21-5 lead, including 11 straight serves for points, and seemed poised to cruise to the win easily.

But McCreary refused to give up and put together an equally impressive run. The Lady Raiders won 16 of the next 18 points to force a Wayne County time out and break McCreary’s rhythm.

The Lady Raiders wouldn’t let Wayne County put the game away without a fight, tying the game three times and forcing extra points for the second time in that match, before the Cardinals finally ran off two straight points for a 27-25 win.

“We came back and gave them a game,” Coach Robert Jones said after the game. “That’s a good thing. We showed toughness and resilience. We could have packed it in, but stayed out there and gave them a fight they will remember.”

“A game like this not only shows us that we can compete, it also allows us to look at what we need to work on as the season progresses.”

The loss dropped McCreary’s record to 5-4 on the season.

The Lady Raiders travel to Somerset tonight, then host Jellico Monday evening and will travel to Burgin next Tuesday.