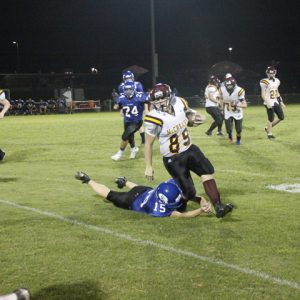 The Raiders Hunter Bryant shakes off a leg tackle Friday night in Clinton County. Bryant would score a touchdown in the loss. 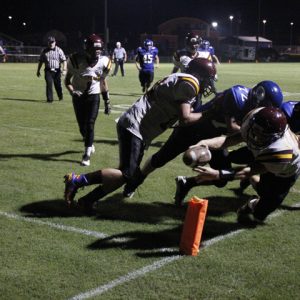 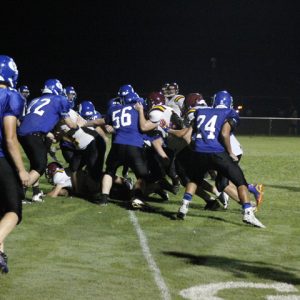 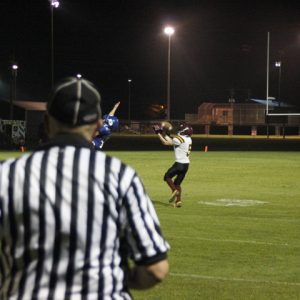 The Raiders finally got the monkey off their back Friday night, scoring their first touchdown of the season and then some.

The impressive performance wasn’t enough to propel McCreary to their first win of the season, but it did provide a much-needed morale boost to the young team.

Quarterback Ryan Jones rushed for two touchdowns and passed for two more, ending a 9-quarter scoring drought for the team. Jones would complete 21 of 31 pass attempts for 277 yards, including a 92-yard touchdown throw to cap off the evening.

The impressive performance wasn’t enough to propel McCreary to their first win of the season, but it did provide a much-needed morale boost to the young team.

Clinton County would hold on to win 44-24, dropping McCreary’s record to 0-3 on the season.

Last season, the first under the leadership of Coach Garry Galloway, the Raiders struggled to score for the majority of the season, finally finding the end zone in their eighth game – ending a drought of 31 straight scoreless quarters.

After the first two games of the 2014 campaign saw McCreary being shut out twice, concerns that another similar streak could be on the horizon.

The Raiders fell behind early Friday night, allowing Clinton County to score 30 unanswered points, but McCreary outscored the Bulldogs from that point on, 24-14.

The Raider offense was showing signs of life, moving the ball well on their first few possessions, but it wasn’t until the second quarter before it really came to life.

McCreary’s first drive stalled after the Raiders attempted a fake punt on fourth down. Quarterback Ryan Jones connected with Nathan Prosser for a 10-yard gain, but it was just inches short for converting a first down.

Clinton County took over on the Raiders’ 48, and their first play was a 38-yard pass. Fortunately for McCreary, the Clinton County receiver fumbled the ball away, and the Raiders’ Brandon Troxell recovered the loose ball on the 10.

McCreary advanced to the 21 on their next possession, but were forced to punt after an incomplete pass.

Clinton would score on their next two drives to end the first quarter with a 16-0 lead and would add two more quick scores to open the second period. The fourth score came after a Raider fumble on the 31, that led to a 2-play drive from the Bulldogs.

Following the Clinton score, McCreary would embark on a 12-play drive that almost stalled out on several occasions.

Early on in the drive Clinton County would decline a holding penalty against McCreary, which would have backed them up deep into their own territory. Instead, the Raiders grabbed a first down with a 14-yard pass from Jones to Troxell. That pass was the first of six straight completions for Jones on the drive, marching the team down the field.

Later in the drive Jones was flushed from the pocket by the Clinton pass rush, but managed to roll out and find Chevy Genoe for a 22-yard completion, bringing the Raiders to the 8-yard line.

A 7-yard rush from Troxell put the ball on the 1, and on the next play Jones ran a keeper inside for the touchdown, putting McCreary on the board, 30-6.

The Raiders’ good fortune continued on the ensuing kickoff.

McCreary tried for an onside kick attempt, which worked to perfection. The ball bounded over a Bulldog receiver, only to be grabbed by James Gregory, who was running full speed down the sideline. McCreary took over on the Bulldogs’ 29 and nabbed their second score of the night on a 4-play drive capped off with a 12-yard touchdown pass to Hunter Bryant.

Clinton County opened the second half with an 8-play scoring drive to take a 36-12 lead, but the Raiders kept up their offensive onslaught with a drive of their own.

Taking over on the 40, the drive almost fell apart before it could begin when Jones was sacked for a loss, setting up a 4th and 13. McCreary tried to convert the first down with a pass to Prosser that fell incomplete, but the Bulldogs were flagged for pass interference on the play, giving McCreary a fresh set of downs.

From there the Raiders would rely more on their ground game, running the ball on five of the next seven plays to march into Clinton County territory. A well-executed 12-yard dump pass to Troxell brought the ball to the Bulldogs’ 1-yard line, where Jones then plowed through the line for the score.

Clinton would respond with their final score of the night with 11:05 left in the fourth quarter to take a 44-18 lead, but McCreary wasn’t done yet.

The Raiders recovered the ensuing kick off on their own 42, but were backed up to the 26 following a personal foul on the play.

A short 2-yard gain was offset one play later when Jones was again flushed from the pocket, but brought down for a 20-yard loss on the Raiders’ 8-yard line.

But on the next play Jones found Gregory down the sideline with a deep pass. Gregory caught the ball around the 41, then outran the defenders all the way to the goal line for a 92-yard touchdown – making the score 44-24.

The McCreary defense came up big on the next series, intercepting a Clinton County pass on the Raiders’ 15, giving their offense a chance to close the gap.

But the drive failed after a Bulldog defender tipped a fourth down pass attempt, causing it to fall short of the receiver and turning the ball back over to Clinton County.

The Bulldogs advanced all the way to the Raiders’ 7, but the defense stood tough and forced a turnover on downs with 3:05 left in the game.

Mustering one final drive, Jones led McCreary down the field in search of one more score. The Raiders were at the Bulldogs’ 42 when Jones was sacked for a fifth time in the game, and had to be helped off the field with a knee injury.

Gregory stepped in at the QB slot, but his first pass attempt was intercepted, effectively ending the game.

The Raiders finished the game with 311 total yards, with 277 coming through the air. Clinton County finished with 257 total yards, 123 from the rush, and 134 from the pass.

The Raiders hope their offense will remain on track this week as they will host their first home game of the season this Friday against Pineville. The Mountain Lions enter the game with a 1-1 record and are coming off a 43-0 loss to Middlesboro last week.