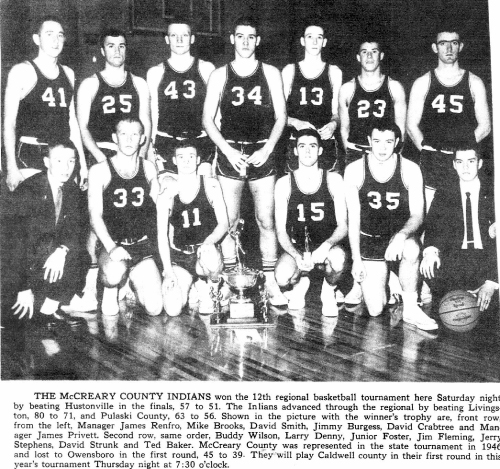 Indians Win Berth in State Tourney was the headline 50 years ago this year. The 1964 McCreary County High School Indians had accomplished what only one other team from the county, the “46 Indians”, had done. So 50 years after this historic event, coaches of that team, Jack Hissom and Conley Manning are returning to join with players, coaches, support people, friends, cheerleaders, and members of the community to share memories and tell stories about their time so many years ago, this McCreary Fest Weekend. They will be meeting Friday evening, October 3rd at the RECC Community Room. If interest please contact: Kari Burgess at K45burgess@gmail.com.

Basketball is a team sport where one player is dependent upon his coaches, fellow players and support people. Remembering the unique situations which created a very special time in the history of McCreary County and all the people who came together in such a magical time is what prompted this event.

Jack Hissom, a 29 year old Marine Corps veteran, a graduate of Eastern State College had come to town to take over an excellent group of basketball players. Coach Hissom reached out to teachers, coaches in the system, and people from the community to help and support his program. There were an are many enthusiastic basketball fanatics in our county, Hissom was known to look these supporters in the eye, agree with them, then do his own thing — and they loved him because of it/in spite of if. Hissom brought his Marine Corp discipline, logistical training, and his never give up attitude to McCreary County; he was a fiery leader who occasionally allowed his salty Marine Corps language make a appearance. He was assisted by home town “boy” teacher/coach Conley Manning, who knew all the families, members of the community and players, and who was known to have a calm demeanor and a level head, together they became a team. Coach Hissom will laugh now when anyone refers to Manning as his assistant, because Manning was actually his boss since he was the Athletic Director. Such is life in the small town.

The Indians began the season by scrimmaging the freshman for the University of Kentucky on the floor of Memorial Coliseum. Maybe this was an omen of things to come. The schedule for the ‘64 team would prove to be challenging and a learning experience. The Indians played in 5 tournaments that year. They played 5 teams that were to be in the Sweet Sixteen. Of the 38 games the Indians played in ‘64, 26 of them were away games. They ended their season 26 wins and 12 losses, 13 wins were achieved in tournaments, 18 wins were away from the home floor. The Indians went into the state tournament on a 13 game winning streak. The state tournament win was not to be. The game was over, but not the memories.

This team pulled together a community, enlisted men already in coaching positions, and members of the community to join a crusade, to mold those young players into shape and prepare them to play at a higher level and as a team, thus preparing them for life. Looking over the statistics from 1964, there were many games where the scoring was spread around the team, several of them scoring in double figures, pulling down multiple rebounds, completing free throws, defensively controlling the game. It truly was a team effort. Several of Hissom’s players went on to play basketball at the college level, and received college degrees. Some became successful coaches and educators, others professionals and entrepreneurs. Many served in the U.S. Military —All became contributing members of society. Jack Hissom and Conley Manning came together, created a legacy, and them moved on as coaches and educators often do. Now they will be back with members of that 1964 Indian team to celebrate, remember, and tell tall tales.