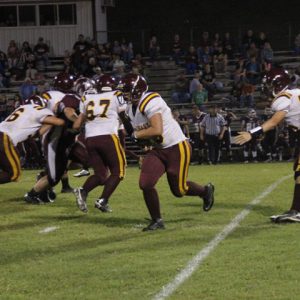 Hunter Bryant gets some blocking on a first-qaurter run against Leslie County Friday night. 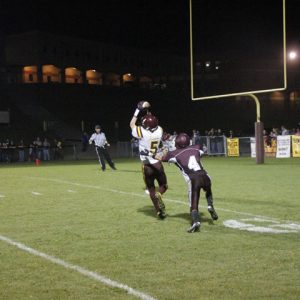 James Gregory catches a touchdown pass from Ryan Jones in the second quarter. 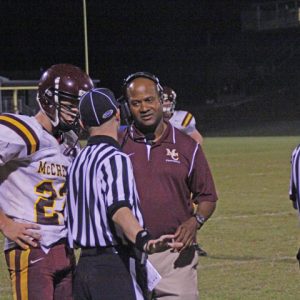 Coach Garry Galloway and Jones confer with an official.

A second-quarter safety deflated the Raiders’ chance for a comeback last Friday night at Leslie County, turning a close game into another big loss for the struggling McCreary team.

The Raiders were down by only 15 points with just under five minutes to go in the first half when quarterback Ryan Jones was forced out of the back of the endzone on a fourth-and-long play.

The Eagles picked up two points on the play, then went on to add two more touchdowns before the first half expired on their way to a 57-12 win and sending the Raiders to their fifth straight loss of the season.

The Raiders managed two scores against Leslie County, both on fourth-down plays, but the Eagles had their share of big plays as well.

The Eagles lost a fumble on their first offensive play, then scored on their next two possessions to take a 14-0 lead in the first quarter, but McCreary would answer back.

On the first play of the second quarter McCreary was facing a fourth-and 10 from the Eagles’ 33-yard line when Quarterback Ryan Jones connected with James Gregory for a touchdown pass that cut Leslie County’s lead down to 8.

The Eagles answered with a score of their own just 22 seconds later with a 79-yard touchdown pass.

A Raider punt on their next series led to another one-play touchdown as the Eagles scored on a 35-yard run to take a commanding 27-6 lead.

McCreary would continue to fight, extending their next drive thanks to a 31-yard run from Brandon Troxell bringing the ball to the Eagle’s 24. Four plays later Jones hit Gregory for his second TD catch, a 23-yard reception on fourth-and-9 to pull within two scores, 27-12.

Then things started to go bad for the Raiders.

Following another Leslie County TD on the next drive, the ensuing kickoff was fielded at the 2 and returned to the 12-yard line.

On the Raiders first play, Gregory pitched the ball to Troxell, but he was hit immediately behind the line of scrimmage for an 11-yard loss, putting the Raiders on their own 1-yard line.

After two incomplete passes brought up 4th and 22, Coach Garry Galloway decided to gamble. Instead of a punt, he opted to run a play trying for a first down. Jones was chased out of the pocket by a determined Leslie County pass rush, and stepped out of the back of the end zone for a safety.

Leslie County would take the free kick and tack on another score on a two-play drive for a 43-12 lead.

The Raiders tried to stay in the game on their next series, moving the ball past mid-field thanks to a late hit penalty, but the drive stalled on a sour note.

Facing fourth and 6, Troxell took a handoff and broke down the left sideline, only to be knocked out of bounds near the first-down marker. Troxell was shoved hard and crashed into the bleachers as a result of the play. He was upset no penalty flag was thrown on the late hit and apparently said something to the official which drew penalty against him and turned the ball over on downs as well.

The Eagles would tack on another score just before the end of the half to take a 50-12 lead into the break.

When play resumed the competition clock was in effect, meaning the clock would not stop throughout the rest of the game.

The Eagles’ first drive of the half ate up nearly 8 minutes, but ended with a fumble recovered by the Raiders at their own 15.

McCreary couldn’t capitalize, turning the ball back over on downs as the fourth quarter started, leading to the final score of the night, a 4-play, 63-yard touchdown drive from the Eagles for a 57-12 lead.

The Raiders offense was led by Ryan Jones who completed 14 of 34 pass attempts for 165 yards, 2 touchdowns and 1 interception. James Gregory led the team with 5 receptions for 127 yards and 2 touchdowns. Brandon Troxell led the team in rushing with 35 yards on 12 carries.

Overall McCreary totaled 220 yards of offense while the defense gave up 464.

Through five games, or half of the season, the Raiders are averaging 200 yards of offense per game while allowing opponents 320.

The Rebels are 2-2 so far this season and are coming off a 35-28 loss to Lincoln County this past weekend.