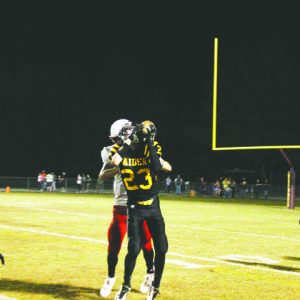 Chevy Genoe catches a touchdown pass in the first quarter of the Raiders’ loss to Casey County Friday night. 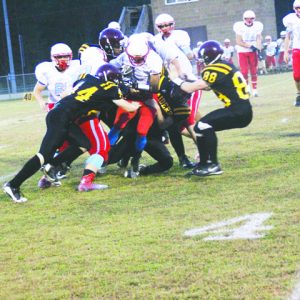 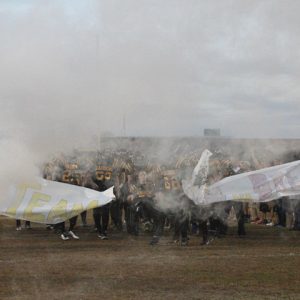 Darren Keith was honored Friday night during Homecoming by leading the Raiders on to the field before the game. Keith was also named Junior Attendant for Homecoming – elected by his classmates.

Five turnovers in the first five minutes of the game put the Raiders in a 30-0 hole they never could climb out of in a 65-18 loss to Casey County Friday night, spoiling McCreary’s homecoming game.

The meeting had significant postseason implications for both teams, as the winner would virtually guarantee a spot in the playoffs, while the loser would need to pull off an upset against one of the three remaining teams in the District for a chance to continue their season.

Things began badly for McCreary as Casey County pulled off a successful onside kick to open the game, recovering the ball on the Raiders’ 46. The McCreary defense held up forcing a turnover on downs on the 33, but ended up giving the ball back two plays later on an interception, which was returned to the 16.

An 11-yard run gave the Rebels an 8-0 lead less than four minutes into the game.

On the Raiders’ first play following the score, a fumbled pitch gave the Rebels the ball back near mid-field. Two plays later they would add another score for a 16-0 lead.

The Raiders bad luck continued on the next series, when another botched pitch on the first play coughed up the ball on the Raiders’ own 11-yard line. Casey County took the first snap and ran the ball to the endzone for a 23-0 lead with 6:54 remaining in the first quarter.

On the first play from scrimmage following the last touchdown, McCreary turned the ball over for the fifth time, and the fourth time on their first five offensive plays. An interception returned to the Raider 11 turned in to the fourth Casey County touchdown in the first 6 minutes for a 30-0 lead.

The Raiders finally woke up on offense with 4:46 remaining in the quarter when QB Ryan Jones connected with Chevy Genoe for a 44-yard touchdown pass and catch to cut the Rebels lead to 30-6.

Casey would answer that score with another touchdown before the quarter expired for a 37-6 lead going into the second period.

McCreary opened the period with a long sustained drive, covering 81 yards and taking up over 8 minutes of the game clock. Ryan Jones punched the ball in on his own after a roughing the passer penalty moved the ball to the Rebel 9-yard line. Jones ploughed up the middle and crossed the line for the score.

Casey would answer the McCreary score with a 2-play scoring drive of their own for a 44-12 lead.

A third interception could have meant more trouble for the Raiders, but a Casey County fumble after a quarterback change gave McCreary new life.

Unfortunately, the Raiders failed to capitalize on the turnover, giving the ball back on downs with 1:04 left in the half and Casey County took a 44-12 lead into the break.

McCreary surprised the Rebels with an onside kick attempt to open the second half, recovered by Brandon Barnett at the Raiders’ 49.

On the first play Hunter Bryant took a hand-off and ran up field for a 51-yard touchdown and breathing new life into the homecoming crowd at Norm Parsons Field.

As before, the Rebels answered with a 4-play, 56-yard scoring drive of the own with 10:07 left in the quarter.

Following the score McCreary put together another drive, taking the ball into Rebel territory, but were unable to convert a 4th and 15 on the 31-yard line, turning the ball over on downs.

Casey would capitalize, scoring three plays later for a 59-18 lead, and starting the running clock with 4:24 left in the quarter.

The Raiders final two drives ended with an interception and turnover on downs, while the Rebels added one final score to cap off the night with the 65-18 win.

In the game Ryan Jones would complete 8 of 23 pass attempts for 101 yards, 1 touchdown and 3 interceptions. Brandon Troxell had two attempts with no completions and 1 interception. Freshman Hunter Jones played the last series of the night at QB and completed 2 of 3 attempts for 8 yards.

In total, McCreary amassed 228 yards of offense, 119 rushing and 109 passing with 7 turnovers in all. Casey County gained 200 on the ground and 145 through the air for 345 total yards and one turnover.

The Raiders have a bye week this week and will use that extra time to prepare for the Corbin Redhounds who come to McCreary Central on Thursday, October 9.