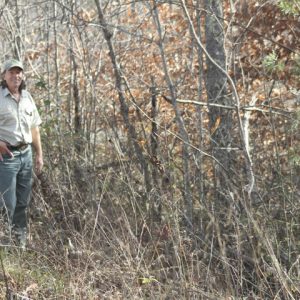 Photos by Eugenia Jones Retiring U. S. Forest Service silviculturist Mike Lick is proud of this particular stand of timber on Rock Creek. Despite some trees dying off, close examination of the stand revealed the growth of hardwoods such as beech, box elder, and ash. Lick pointd to this stand of timber as a perfect example of the Forest Service letting nature take its course. 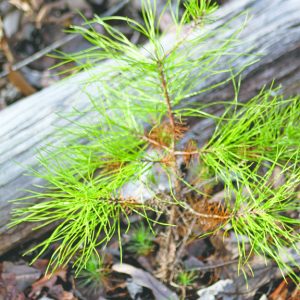 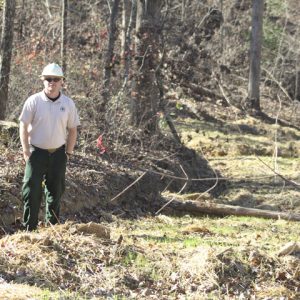 Photos by Eugenia Jones Dwayne Wright, U.S. Forest Service Timber Harvest Inspector, described some of the safeguards taken by the U. S. Forest Service when contracting with commercial loggers. The Forest Service retains control over identification of trees to be logged, approves skid trails and landings, requires skid trails be planted with vegetation, prevents logging within so many feet of streams, cliffs, cultural resources, and special areas, and constantly supervises the logging process.

After thirty-three years of managing national forests throughout the United States, including his current assignment with the Daniel Boone National Forest-Stearns Ranger District, silviculturist Michael Lick is preparing for retirement and wrapping up his part of the Greenwood Vegetation Management Project.  The Greenwood Vegetation Management project is a U. S. Forest Service proposal designed to diversify wildlife habitat in portions of the Daniel Boone National Forest located in sections of McCreary and Pulaski Counties.

The proposal calls for  thinning of the forest, use of prescribed fire, woodland establishment, shortleaf pine restoration, development of wildlife openings and edge treatments, and the creation of upland water sources for wildlife.  Lick, with his experience and expertise, has been instrumental in the development of the proposal.

Despite his training and experience, Lick acknowledges there are those who have a much different perspective of how national forests should be managed.  Sometimes, that difference in perspective, can be a source of frustration for the man who has spent so many years as a manager of public forests. As a silviculturist working with the management of public lands, Lick views commercial logging as a useful tool in forest management.  Others, including some environmental groups who oppose the use of any commercial logging in the Greenwood Vegetation Management Project, disagree adamantly.

“Forests are a lot like people,” Lick mused.  “Just like people, trees get old, are less vigorous, are more prone to disease and insect attacks, experience dieback, and eventually die.  It’s important to always have young forests ready to replace old forests that may die due to disease, insects, wind events, snow events, and ice events.  Good forestry boils down to having a variety of different ages and types of forests. Commercial logging can be a tool to reach that objective.”

According to Lick, when a forest is properly managed, it can provide a variety of habitats for wildlife, offer diverse recreational opportunities, create jobs which support a rural lifestyle, improve water and soil conditions, be a source of wood products needed in daily life, and ensure healthy trees for the future.

Even-aged management regenerates and maintains stands of trees with a single age class.  A clearcut is an example of an even-aged method and is the cutting of essentially all trees, producing a full exposed microclimate for the development of a new age class.

However the temporary openings left behind after harvest can be disturbing to many.  Locally, many residents have unpleasant memories of clear cutting that took place in stands of timber in the DBNF in the past.

“Clearcutting has been reduced drastically but could be used in rare cases, like converting upland white pine stands to fire-resilient shortleaf pine ecosystems,” Lick stated.

In two-aged management, varying numbers of reserve trees, such as potential roost trees and immediate roost trees for Indiana bats are not harvested to attain goals other than regeneration.  This method still creates a relatively open microclimate for restoring shortleaf pine.

“Many people consider it clear-cutting, but it’s not.  We leave some trees for wildlife and aesthetic value.  Two aged management can be ugly at first; however, it is beautiful when young trees pop up and produce a beautiful young forest in three to five years.  Regeneration begins almost immediately as young trees begin regenerating from seeds, stump and root sprouts, and plantings.”

Despite the short term unpleasantness of viewing an area subjected to two-aged management, Lick emphasized the importance of restoring short-leaf pine in the DBNF.

“A variety of wildlife need short leaf pine for habitat,” Lick commented.  “Restoration of short leaf pine provides habitat for deer, pine warblers, future habitat for Red Cockaded Woodpeckers, and other species.  Areas restored to shortleaf pine and managed with controlled burning could provide habitat needed by a variety of songbirds, reptiles, and small mammals, and restore fire mediated plant communities and improve the ability of forest ecosystems to withstand and recover from wildfire.  The short leaf pine was originally in this area, and it is a fire resilient tree.  With it, we can do prescribed burns and create habitat for a variety of native grasses, forbs, flowers, turkey and other wildlife.  Diversity is the reason for forest management.”

“If you’re gonna make an omelet, you gotta scramble some eggs,” Lick said with a smile.  “You might not like the look of the scrambled eggs, but the omelet, as the end product, is perfect.  Sometimes, in forestry, you have to clear out some old trees to make way for a new young forest.”

For Lick, being a forest manager has simply been a matter of observing what Mother Nature tries to accomplish and expediting that process.  He likens it to the gardener who tends his crops through cultivating, planting, nurturing, weeding, thinning, and harvesting.  Lick sums up his life’s work as a forest manager by sharing words of wisdom from a forester friend.

“The forest is a gift of God’s creation,” Lick remarked as he recalled his friend’s wisdom.  “To be a servant of the forest is a fine vocation.”