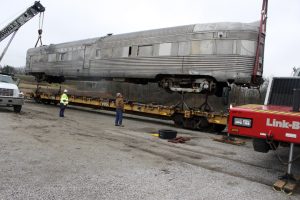 Photo by Eugenia Jones The Silver Fountain railway car recently arrived in Stearns for restoration. Cranes were used to move the unique 117,000 pound car. Owned by Steven and Michelle Richards of Crossroad Rail Car Services in Stearns, the car will be attached to the Cincinnati Dinner Train as part of a lease agreement. 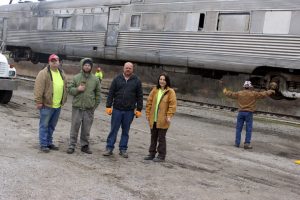 Photo by Eugenia Jones Steven and Michelle Richards currently employ eight people at Crossroad Rail Car Services in Stearns. Early on, twenty people were employed through the company. Richards is expecting to have a total of twenty employees again in the spring. The shop restores railway cars from across the country. Steven Richards is pictured (third from left) with some of his employees.

The unique rail car is designed with a small kitchen capable of full meal service located conveniently next to a twenty-four seat dining room.  The observation end of the car has two restrooms and a spacious 22 seat lounge.  The car was retired by the CB&Q in the late l960s and then leased to Quaker Oats for a party room at their plant in Missouri.  It was later sold to private owners in 1973.

Only four of these cars have ever been built.  One of the four is now in Texas, one is located over seas, and one is in a Wisconsin museum.  Of the four original cars, the Silver Fountain will be the only one in service when it arrives later this summer to be attached to the end of the Cincinnati Dinner Train.  The Richards have leased the car for the next several years to Brian Collins, owner of the Dinner Train, and will deliver it to Cincinnati when restoration of the car is complete.