On March 8 all polling places will be open from 6:00 a.m. to 6:00 p.m., with the votes to be tallied that evening in the McCreary County Courthouse 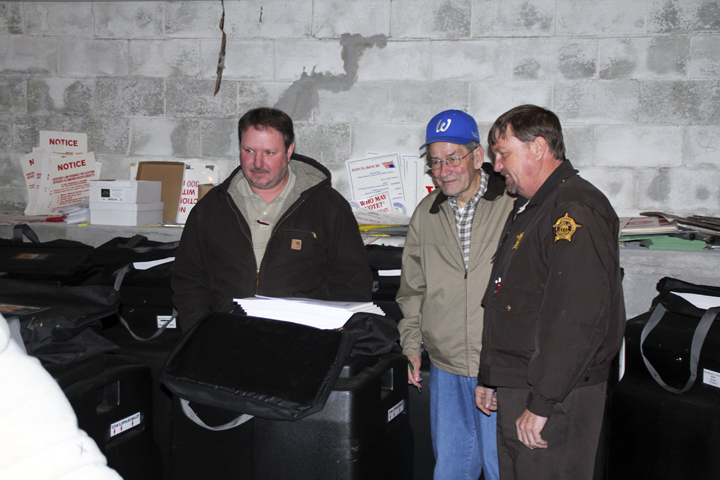 Photo by Greg Bird
County Clerk Eric Haynes and Election Board members Ralph Murphy and Randy Waters inspect the voting machines prior to the election.

In less than a month McCreary County voters will have another opportunity to cast their vote to decide on whether or not to allow alcohol sales locally.

On Tuesday, March 8, a special county-wide election will be held with one question on the ballot: “Are you in favor of the sale of alcoholic beverages in McCreary County?”

A petition containing 703 valid signatures was turned in to County Clerk Eric Haynes in December, setting in motion the process to establish a special election to be held.

Tuesday Haynes met with members of the McCreary County Election Board to finalize plans for the election and to inspect the voting machines.

Included in the discussion was the creation of an emergency plan in case a weather event threatens to disrupt the election. Haynes stated that if power is lost at a polling place on election day, as it did at one location in 2012, citizens would still be able cast their ballots, and election officers would ensure their votes got tallied.

Registered voters, ages 18 and older will be able to cast their ballots in the election.

The last day to register to be eligible to vote in the election passed Tuesday.

Haynes stated his office had received a few requests for absentee ballots, and his office will be open for early voting (open to citizens who will be out of town on election day) starting February 16.

On March 8 all polling places will be open from 6:00 a.m. to 6:00 p.m., with the votes to be tallied that evening in the McCreary County Courthouse.

If the measure fails to pass, it will be at least three more years before another county-wide vote on the issue can be held.

If the bill passes, the County Clerk will have to certify the vote. Once that is completed, and any legal challenges satisfied, the county would have 60 days to adopt an ordinance outlining the scope of the law.

The ordinance should cover licensing fees and requirements, and any additional taxes levied against the sale of alcohol. Additional regulations, such as operating hours and limits of sales can be included.

An Alcoholic Beverage Control Board would have to be appointed and an ABC Coordinator hired.

Any additional local taxes collected from alcohol sales would be earmarked toward enforcement and operating costs for the ABC office, law enforcement and emergency services, and education and prevention programs.

Persons or businesses wishing to apply for a license, must first submit an application to the county, with the appropriate fees, then, a detailed application would have to be sent to the state for approval as well.

Retail Beer licenses will have no quota, unless set by local ordinance, allowing grocery stores and convenience stores to apply for a license. They will be permitted to sell beer as long as they maintain $5,000 worth of food in their inventory.

Only about seven Beer and Liquor package licenses would be available in McCreary County due to state regulations based on population. Until last month, only drug stores and stand-alone package stores could apply for such a license.

However, a recent Kentucky Supreme Court ruling overturned that law, and now grocery stores can apply for one as well. Package stores could sell beer, wine and distilled spirits.

Full bars or nightclubs that serve liquor will most likely not be permitted to operate in the county since those establishments are only allowed in counties with a first, second or third class city.

But, a beer-only bar could possibly be opened as long as it met local requirements and enough licenses were available.

Restaurants may be able to apply for a beer or liquor by the drink license as long as they can seat at least 100 people and derive 50 percent of their revenue through food sales. Only about seven of those licenses will be available due to regulations as well.

The last time alcohol sales was put to a countywide vote, in August 2012, the measure failed by just 47 votes, one percent of the nearly 5,000 total votes cast in the election.

Last fall voters in Stearns approved the limited sale of alcohol in the Downtown Historic District.

While there is tax revenue generated from sales in Stearns, it operates on a special license, and all taxes collected go to the state, not the county.

Over the past two months one Kentucky county, and three cities, have voted to allow alcohol sales in their communities. Recent election in Barbourville, London, Beaver Dam and Russell County saw referendums passed permitting sales of alcohol.

Similar elections in Graves and Butler counties have failed in the past month. The city of Monticello is reportedly circulating a petition to sell alcohol at this time as well.

According to the Kentucky Alcohol Beverage Control Board, as of October 2015 McCreary County is one of 28 counties to be fully “dry.” 36 are “wet” while the remainder have some sort of alcohol sales in cities within the county.