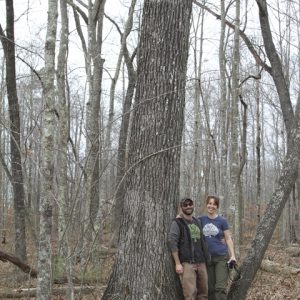 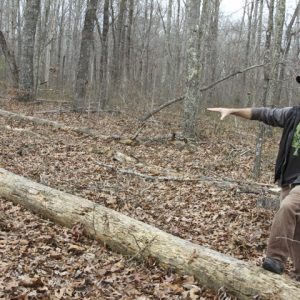 Photo by Eugenia Jones Kentucky Heartwood Director Jim Scheff surveys one stand of timber in the Daniel Boone National Forest targeted by the proposed Greenwood Vegetation Management Project. The project, aimed at southern Pulaski and northern McCreary Counties, includes plans to log over 3,000 acres of the Daniel Boone National Forest. In addition, the proposal calls for the use of herbicides over 200 acres and the implementation of prescribed burns. Kentucky Heartwood will host a public forum this Saturday February 13, from 1:00 until 3:00 pm at the McCreary County Public Library to provide information and answer questions about the proposal. 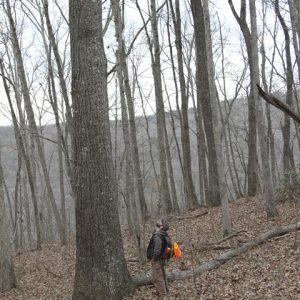 Attending summer camp as a youngster may well be what led Jim Scheff to become the Director of Kentucky Heartwood, a not-for-profit organization and community of individuals dedicated to the health and well-being of Kentucky’s native forests.  Kentucky Heartwood began in 1992 in the heyday of logging in the Daniel Boone National Forest (DBNF) when over 100,000 acres of DBNF were logged in less than twenty years.  The organization was formed when a hand full of regular folks watched clear cutting on the DBNF and came up with ideas on how to protect the forest.  Eventually, the organization challenged the U.S. Forest Service in court.

“Growing up as a child, I really wasn’t from the outdoors,” Scheff mused.  “I was fortunate to spend summers at a camp in Wisconsin where I took trips to the Northwoods.  It was there that I fell in love with the forest.”

Later, while still in high school and backpacking in the Pacific Northwest, Scheff saw his first clear cut.  The sight of a stand of timber cut bare made its mark on the impressionable young man. Scheff, who had always assumed national forests were protected, learned about the logging program in national forests from a counselor at the camp.

Scheff stayed busy “living life” over the next few years-attending college and becoming a father.  During his mid-twenties, Scheff attended a presentation by Missouri Heartwood about logging on the Mark Twain National Forest and nation-wide efforts to preserve forests.  With the love of forests firmly rooted in his heart, Scheff instantly became hooked on the idea of working to preserve the woodlands.  He knew he had found his type of people, and he knew he had found his niche.

Scheff’s concerns escalated as he learned more and more about the National Forests, and he rapidly became a vocal advocate of the preservation of our public woodlands.

“I know how wonderful forests can be, and I know how important it is to protect them,” Scheff voiced passionately.  “Our public lands give us so much.  They are an integral part of our heritage and human nature.  We lose something if we lose our forests.”

Scheff can’t imagine living in a country without large areas of wilderness.  However, his passion for the wilderness has its downside.

“When you learn too much about the need to protect our public forests, it gets hard to relax when you actually go out into a forest,” Scheff commented.  “It becomes impossible not to think about threats to our woodlands.  When I visit the 708,000 acres of Daniel Boone National Forest, I’m that way.  I can’t turn it off.  I keep investigating and thinking about ways to protect it.  Saving the DBNF means that much to me and to others.  It’s my job to protect it.”

Scheff’s devotion to woodland forests and his crusade to preserve them has now brought him front and center to McCreary County.  As director of Kentucky Heartwood, Scheff is leading the charge for changes to the proposed Greenwood Vegetation Management Project (GVMP) involving portions of the Daniel Boone National Forest in northern McCreary and southern Pulaski Counties.  The proposal, largely focused on McCreary County, calls for the establishment of woodland type communities, restoration of short leaf pine communities, implementation of commercial and non-commercial thinning, and maintenance of wildlife openings.  The proposal calls for the use of several forest management techniques including commercial logging, use of herbicides, and prescribed burns throughout the targeted area.

Although Scheff concedes the U. S. Forest Service currently does more robust analysis of projects than it did in the past and has reduced the amount of logging on Kentucky’s public lands, Scheff points to the GVMP as being the largest project he has seen since the late 1990s with the exception of the Morehead Ice Storm Salvage Project.

Scheff is particularly against the proposal of commercial logging in the Greenwood Vegetation Management Project.

“I find it offensive that logging is proposed and will occur at a monetary loss to the public,” Scheff remarked.  “Yet at the same time, money won’t be made available for development of trails, campgrounds, and picnic areas.  This isn’t just a problem with the Daniel Boone National Forest.  This is a national issue about how limited resources are spent on our public lands.  Kentucky Heartwood agrees some forest management, including mid story removal, thinning of recovering clearcuts, and the use of prescribed burns in some stands, is needed.  However, it is possible to achieve the results the Forest Service wants without resorting to commercial logging.”

Scheff expressed great concern about some of the areas identified for short leaf pine restoration in the GVMP.

“What’s being proposed in many instances is not short leaf pine restoration; it’s conversion,” Scheff claimed as he walked through a stand of large oaks and other hardwoods slated, in the current GVMP proposal, to be heavily logged and replanted with shortleaf pine.

“This makes me sad because here is a really nice, somewhat mature forest,” Scheff explained as he gazed at a stand of timber targeted for short leaf pine restoration.  “It’s beautiful, and it is what people want to see in a forest-healthy oaks producing mast for wild-life.  If we don’t get changes made in the GVMP proposal, this stand will be subjected to what is, basically, a clear cut for no reason.  The pine beetle devastated lots of other areas in the forest that are more suitable to work with when it comes to restoring short leaf pine.”

Scheff reiterated Kentucky Heartwood is not against forest management.  Rather, the group calls for the preservation of woodland forests through the use of management techniques such as prescribed burns, non-commercial thinning, and working with natural disturbances to create a diversity of wild-life species within the Daniel Boone National Forest.

“Diversity is a good thing-but let’s not lose things we don’t need to lose,” Scheff emphasized.  “We need to be working with what nature has already accomplished in managing the forest.  When we cut out the big oaks we are losing something people and animals care about and need.”

(Scheff and other members of Kentucky Heartwood will host a public forum on Saturday, February 13 to share information and concerns about U.S. Forest Service plans to log approximately 3,000 acres of the Daniel Boone National Forest in McCreary and Pulaski Counties as part of the Greenwood Vegetation Management Project.  The project also includes over 200 acres of herbicide spraying and 10,000 acres of prescribed fire.  The meeting will be held at the McCreary County Public Library from 1:00 to 3:00 PM and is open to the public.  For more information, call Kentucky Heartwood at (859) 334-0602 or email jim@kyheartwood.org.)