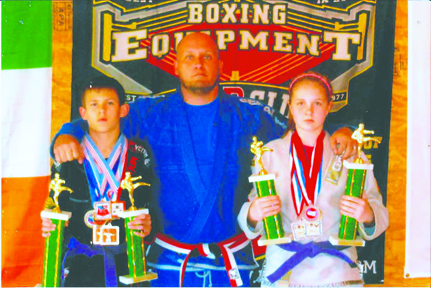 Photo submitted
Dalton Daugherty and Grace Reardon are pictured with Ju Jitsu Master David King of Pine Knot’s Elite Combat. Daugherty and Reardon will travel to Ireland in the summer to compete.

McCreary County’s Dalton Daugherty, son of Donnie Daugherty and Jennifer Meadows, and Grace Reardon, daughter of Daryl and Ramona Reardon, have both earned spots to travel with the A. K. J. U. Team America to compete at the Irish Cup in Dublin, Ireland during June 2016.  They will travel along with their Ju Jitsu instructor, Master David King, who is the owner of Elite Combat in Pine Knot.

Both Dalton and Grace earned their spots by winning the A.K.J.U. National All American title in their division this past August in Ohio.  Dalton has trained for six years, and Grace has trained for four years at Elite Combat.  The two have competed throughout their training at the Regional, State, and National levels.  The two will compete to bring home a junior Irish Cup World Title.

“It is a great achievement to earn this chance of a lifetime,” remarked Master King.  “I am so proud of them and my entire team.  They will have the experience of a lifetime!”

Before competing in Ireland, Dalton and Grace will travel with King and other members of the A.K.J.U. team to Warsaw, Poland.