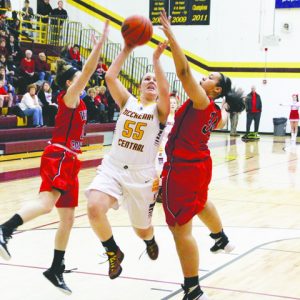 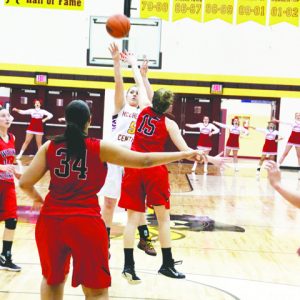 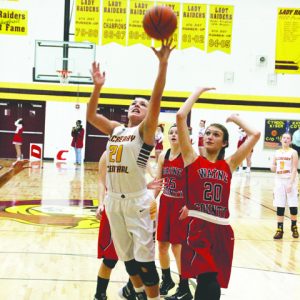 Despite being underdogs entering Monday’s 48th District Tournament against Wayne County, Coach Todd Waters and the Lady Raiders had a game plan they believed would give them a fighting chance to upset the Cardinals and return them to the 12th Region Tournament for the first time since 2013.

A strong defense would be needed to limit the Lady Cardinals’ scoring opportunities, and for the most part, the Lady Raiders accomplished that task – holding Wayne County to less than 50 percent shooting for the game.

But an unexpected wrinkle, namely the Lady Raiders’ lack of scoring, disrupted the plan and ended McCreary’s season with a 65-42 loss.

The Lady Raiders shot a disappointing 23-percent (10-43) from the floor for the entire game, and only scored their first offensive basket with 8 seconds left in the first quarter.

Coach Todd Waters said the defense kept his team in the game over the first three quarters, but the game started to slip away in the final period as McCreary tried to mount a comeback.

“If we could have held them to 50 to 55 points, which was our goal, but we had to speed things up and start fouling them there in the end,” he said.

“I felt if we held them there, we could win the game. We just didn’t shoot the ball well. Some nights that happens.”

“We played hard, we played as a team and I’m proud of all the girls, especially our seniors Kaylee Cotton and Cyndol Kiser. They played as hard as they possibly could for the entire year.”

It was a rough start for McCreary as they missed their first 10 shots in the first quarter, gaining points only on four Cotton free throws and one from Brooke Sluder, and trailed 17-7 after 8 minutes.

The Lady Cardinals were patient, spreading out the McCreary defense and controlling the boards, but saw their lead shrink to just 11-points, 31-20 at halftime.

Neither team performed well in the third quarter. McCreary had managed only four points over the first four minutes, but Wayne County had added only six.

But the Lady Raiders started to run into foul trouble, which allowed the Lady Cardinals to start to pull away.

Wayne County led by 16, 45-29, starting the fourth quarter, but were able to pad their lead thanks to free throws. The Lady Cardinals shot 24 free throws alone in the final period, allowing them to pull away for the win.

Cotton, who entered the tournament second in the state in scoring average, did her best to keep her team afloat, leading all scorers with 32 points.

The Lady Raiders ended the season with a record of 7-21.

Wayne County will advance to play Southwestern tonight at 7:00 p.m. at McCreary Central for the 48th District Championship.