A first-hand perspective of getting hit with a Taser 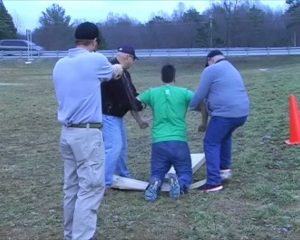 The moment of impact when the author got Tased. 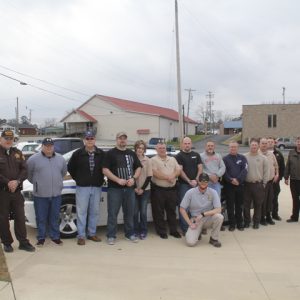 Photo by Greg Bird In all, 16 members of McCreary County Sheriff Randy Waters’ Deputies and Court Security workers participated in the training program Saturday. All are now certified to use Tasers in the line of duty. 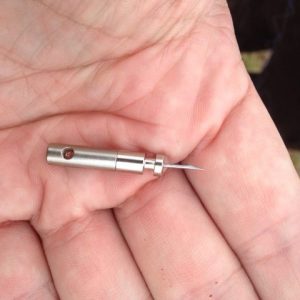 A close up look at the probe attached to the end of a conducting wire that delivers upwards of 15,000 volts.

As part of the McCreary County Sheriff’s Department’s training session Saturday, I was one of four volunteers to get a first-hand experience on what it is like to be hit with a Taser gun.

Sheriff Randy Waters, along with 16 deputies and Court Security Workers underwent an 8-hour training class Saturday with Instructor Curtis Stone of the U.S. Park Service to earn their certification to use Taser guns as part of their non-lethal arsenal.

While the officers sat through several hours of classroom instruction and training, the intensity really picked up once they went outside for the live-action training.

The Taser gun is “armed” when the cartridge is installed, and when deployed shoots two barbed probes with a burst of compressed gas. The barbs, just over half an inch in length, are connected to the gun by a thin conductive wire.

When lodged in the skin of a would-be offender, a five-second pulse of about 15,000 volts is discharged, causing involuntary muscle contractions. If an offender is running toward an officer, or otherwise combative, the discharge typically is enough to stun them and immobilize them.

The five-second window usually provides time for the officer to gain control of the situation and prevent it from escalating.

But, as part of the culmination of the training, the officers are offered an opportunity to see exactly what firing their weapon can do to a suspect.

Volunteers were asked for, and three officers and one civilian offered to “ride the lightning.”

When it came time to put up or shut up, the instructor had me kneel on the ground with my back to him, and Deputies Mike Neal and Jerry Meadows were on either side of me to hold my arms to prevent a fall injury.

After asking to make sure I was willing to go through with the test, Stone lined up his shot from about 10 feet behind.

Within an instant the probes hit my back.

I only had a brief moment to notice the impact before every muscle in my body tensed and I locked up completely as upwards of 15,000 volts coursed through every nerve in my body.

I was totally aware of what was happening, and was somewhat surprised to realize that the pain was not that bad.

I did feel intense pressure everywhere, but especially in my lower abdomen, and just wanted to take a deep breath.

Though the whole thing lasted only five seconds, it certainly felt a lot longer. About four seconds in I tried to grab a lungful of air, but couldn’t, and a pitiful sounding groan escaped from my throat.

But, once the charge was over, everything went back to normal.

On the video I can be seen going limp for a second, then gathering myself together and propping up on my elbows. If it weren’t for the two people holding me, and the probes in my back, I would have been back on my feet in an instant.

Deputy Tom Smith removed the barbs, and Stone called everyone to look at what they did to my back.

Other than two welts from the impact and a little bit of blood from where the probes stuck me, there were no lingering effects.

I did feel a little sore later that night, as the five-second experience gave my muscles the equivalent of a one-hour workout in a gym.

Not that I’d recommend this as an alternative to a real work-out.

Following my experience, three members of the Sheriff’s team, Angie Vanover, Cody Stephens and Mike Tapley, also stepped forward to take their turn. They all performed well, and took the shock like champions.

The probes, with a tiny barb on the end, are an important part of the Taser. They lodge in the skin, and won’t easily come out. That allows for more current if the situation demands.

If a suspect gets tased, and continues to struggle after the initial burst, the officer can trigger additional bursts of current, allowing him a chance to gain control of the situation and close the distance between him and the offender.

If that fails, the officer can use a “drive stun” discharging upwards of 55,000 volts directly from the Taser gun.

That burst actually hurts, from what I have been told. It is used only in extreme circumstances and considered “pain compliance.” It is more effective, and safer for both officer and suspect, than pepper spray or other measures.

Having experienced the Taser, I certainly can affirm that I would not want to repeat the experience again in my lifetime.