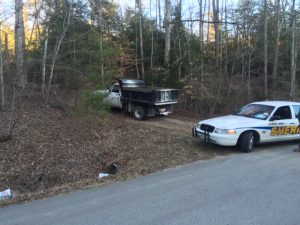 Photo by Thomas Fuson
Officers searched the woods near the place this dump truck stopped after the driver fled.

A dump truck travelling at a high rate of speed Monday evening led to a search after the driver of the commercial vehicle ran from officers after an attempt to pull him over.

According to the Kentucky State Police, Trooper Tony Duncan attempted a traffic stop around 5:23 p.m. Monday evening after witnessing the truck driving dangerously at a high rate of speed on U.S. 27 in northern McCreary County. The vehicle was spotted passing a line of traffic on the wrong side of the road. Trooper Duncan turned on the truck in an attempt to issue a citation. Rather than stopping, the driver sped away northbound on the highway, causing more potential danger to fellow drivers on the road.

A short chase ensued, with the Trooper requesting backup from other local law enforcement officers joining in.

With officers in pursuit, the truck navigated a dangerous turn on to Tucker Town Road, before coming to a stop a short distance up the road, where the driver then fled from the truck into the nearby woods.

A passenger in the truck, who remained on scene after the vehicle stopped, was interviewed by officers and allowed to leave.

The KSP has not released any information as to the possible identity of the suspect, but it is believed a warrant will be sought for the driver.

Officers searched the area for several hours, but were unable to locate the suspect and the search was suspended.

The vehicle was impounded and the investigation continues.