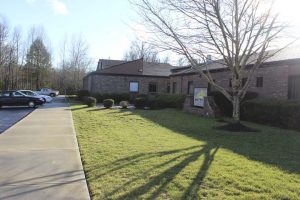 Photo by Eugenia Jones
McCreary Center, the local branch of Somerset Community College, has released its fall 2016 schedule including both face-to-face and online classes.

Despite rumors to the contrary, the local branch campus of Somerset Community College plans to remain open to students in the fall, McCreary Center Director Steve Hammons said this week.

Although definitely impacted by Kentucky Governor Matt Bevin’s proposed budget cuts, the McCreary Center has released its fall 2016 schedule and is offering face-to-face classes for the coming semester.

“Any reduction in class offerings is simply because we have dropped classes from the schedule that typically don’t make,” Hammons commented.  “Although a large percentage of students prefer on-line classes, we are continuing to offer enough face-to-face classes for students to complete their two year degrees at the McCreary Center.  The classes we are offering are the ones students are most often drawn to for completion of their programs of study.”  Classes will continue to be held on a Tuesday/Thursday schedule.

Due to state budget concerns and fluctuating student enrollment, some changes may be inevitable, such as staff reductions or fewer class offerings.  However, Hammons emphasized the Center continues to have their financial assistance coordinator and student advisors at the Center on a regular basis.  The Center also maintains their front office staff and testing center.  In addition, the Adult Education program and Extension Agency programs operate out of the Center building.

One significant change students will see this year is the elimination of face-to-face summer classes in favor of more on-line classes for the session.

“We’ve held face-to-face classes during the last three summers at McCreary Center, but as of now, we don’t have plans for those this year,” Hammons explained.  “The majority of students taking classes in the summer prefer on-line classes.  Because of that, we’ve beefed up our on-line summer offerings.”

Hammons expects more information to be forthcoming in the next few weeks as administrators complete their plans for upcoming class sessions.