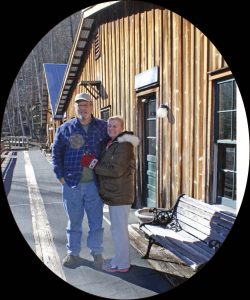 Photo by Eugenia Jones Richard and Donna Koger are in charge of day to day operations of the restored Barthell Coal Mining Camp.

When Harold “Sonny” Koger opened the restored Barthell Mining Camp in the spring of 1999, his desire was to preserve a piece of McCreary County’s coal mining history-a history rapidly being forgotten.  Since his own father, Austin, had worked in the coal mines for forty-eight years, Sonny was familiar with the grueling work. Born at Fidelity Coal Camp and raised at Cooperative until the age of fourteen, Sonny had first-hand knowledge of life in a coal camp.

Sonny took his first step toward preserving the history of coal mining In the 1990s when the late Frank Thomas, a former president of Stearns Mining Company, started selling off much of Stearns’ outlying land to the federal government.  Wanting to ensure at least one coal mining community would be preserved, Sonny convinced Thomas to sell the Barthell parcel of land to him for restoration of the coal camp.  Thomas agreed to sell but with one significant stipulation-he required restoration of the camp be historically correct.  Koger agreed to Thomas’ demand and called upon the University of Kentucky to do an archival study of the coal camp.  In doing their study, University experts managed to find the original locations of forty-one houses and nine buildings existing in Barthell when it was a thriving community.  Today, with its boundary lines joining the U.S. Forest Service and National Park Service, the restored Barthell Coal Camp is a privately owned oasis surrounded by federally owned property.

After Sonny’s death in 2004, his sons, Dwight, Brian, and Richard, took over the reins of Barthell.   Richard and his wife Donna handle day to day operations.  Richard is the first to acknowledge the difficulty of operating a private tourism attraction in McCreary County.

“We’re getting by and paying the bills,” Richard reflected.  “Private tourism is a tough business in this county.”

Noting the importance of advertising, Koger was quick to point out how expensive it is to advertise a tourist destination such as Barthell.  He also noted the lack of “outside” help available to those wishing to build a successful private tourism attraction in a remote area.

“You don’t get much help in tourism through the government unless you operate as a non-profit,” Koger commented. “We’ve thought about trying to go the non-profit route, but I suppose we will just continue on as we are.”

Locally, Koger acknowledged the McCreary County Tourism Commission for their help in advertising and promoting Barthell.

“One thing they have done that has helped us is their Yamacraw Run,” Koger stated.  “We booked up with it last year and expect to max out again this year.  We’ve already gotten several reservations.”

Barthell is typically open from April through October.  The twelve, rustic coal camp rentals are either one or two bedroom with some designated as pet friendly.  Each has a porch with swing where visitors can enjoy a view of Paunch Creek.  Meeting rooms are available.  Located in close proximity to the Blue Heron section of the Big South Fork National River and Recreation Area, outdoor adventure opportunities are abundant.  On site, visitors can hike, explore the creek, or take a guided tour of the camp.  The guided tour includes a walk into the entrance of the mine.

As difficult as it is, Richard and his brothers are committed to preserving the history of Barthell.

“One of the last things my dad said before he died was for us to preserve the history as long as we are able,” Richard recalled.  “It was a tough, hard life working in the coal mines.   This (Barthell) is about all we’ve got left of that history-that way of life.  We’ve got to keep it going.”