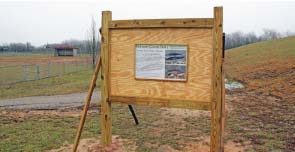 During Thursday’s Fiscal Court meeting Judge Executive Doug Stephens noted that the placement of several informational signs at the park should satisfy the last of the conditions placed on the County by the Kentucky Division of Water over the lengthy battle over the development of the park.

The signs, four in total, are predominantly placed in various locations and present visitors with information regarding the natural wildlife, terrain and vegetation that are preserved in the park and surrounding areas.

McCreary County Judge Executive Doug Stephens said this week he has sent all the information to the Division of Water and expects a response soon stating they are satisfied with the work.

The placement of the signs was hopefully the final step to resolve an issue that developed during the construction phase of the project in 2007. 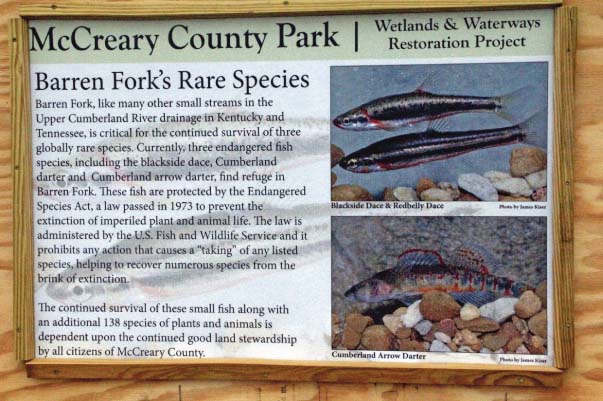 The area of the park containing the western tributary was impaired when, early on in construction, Weddle Enterprise (Contracting) reportedly did not follow proper procedures to prevent sediment overspill into Indian Creek.  Indian Creek, leading into the Cumberland River, is a home of the blackside dace, which is federally listed as a threatened species.  The resulting environmental impact to the habitat of the tiny fish led to an extensive delay in construction of the park.

During the design phase of the park, architects and engineers discussed the project with representatives of the Division of Water and attempted to comply with any regulations that were in place regarding the watershed. At that time, state officials reportedly told the planners that the work would not impact any protected watersheds and no permits were needed.

But, once site development was underway, less than seven months into the project,heavy rains breached an incomplete erosion dam and silt flowed off the site and into adjacent properties, including the tributary that holds the endangered fish. That is when problems first confronted those responsible for development of the site.

In December 2007 the DOW and the U.S. Fish and Wildlife Service issued a Notice of Violation to the contractor and property owner and forced development on the eastern part of the site to be halted.

Development was stalled for a year as the damage was assessed and Park Board officials negotiated with federal agencies to remedy the damage and gain permission to continue with work.

Kentucky Fish and Wildlife estimated about $370,000 worth of damage was caused to the wetland, but an agreement was reached that allowed the County to perform mitigation work at other habitat sites around McCreary in lieu of the cash fine.

Originally, the DOW asked for the western tributary to be cleared, with extensive work to slow down the flow of water and subsequent erosion.  However, after meeting with the park board, DOW officials backed off of their original demands stating that the growth of vegetation had naturally taken care of much of the problem.

Working with state and federal agencies, the County worked to protect and preserve the tributary, satisfying much of the conditions of the agreement.

In August 2008 work resumed, and the Little League Fields and Multi Generational Building were officially opened in 2010.

In a related issue, County Attorney Conley Chaney requested the Fiscal Court grant him authority to negotiate with Weddle Enterprise to resolve the outstanding debt on the work done at the park.

The Fiscal Court had set aside more than $200,000 of Park Funding in a special account to hold in case a settlement could not be reached.

Judge Executive Stephens said the County has footed the bill for the mitigation work, and that cost could be offset by the outstanding bill. He stated he believed Weddle would agree to forgive the debt, rather than undergo a legal battle.