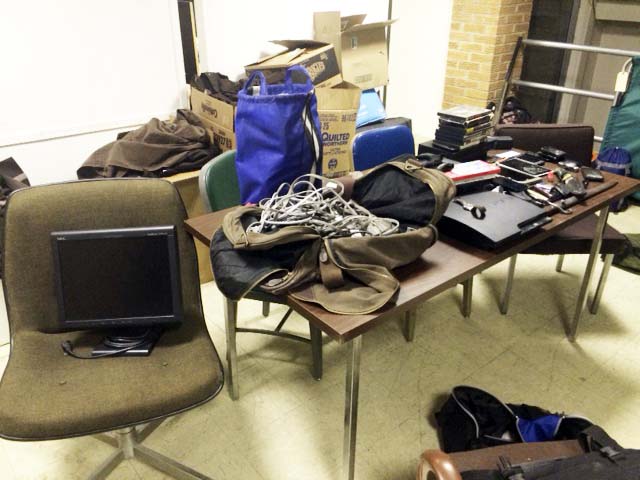 Photo submitted
Some of the items stolen from the Bestway Pawn Shop and Gameroom have been recoverd by the McCreary County Sheriff’s Department.

McCreary County Sheriff Randy Waters is reporting the arrest of an individual in relation to a Monday morning break-in at the Bestway Pawn Shop and Game Room.

Robert Lowe Jr., 29, of Stearns, was charged with several counts related to the theft, and additional charges may be pending as the investigation continues.

Sheriff Waters stated the break-in occurred early Monday morning when Lowe allegedly made entry into the businesses and was caught on security cameras breaking into gaming machines taking coins and stealing various items from the shop.

Authorities were able to identify Lowe as a suspect thanks to the security footage and went to his residence to question him, but he fled before he could be taken into custody.

Around 2:00 a.m. Tuesday morning Deputies Odell Smith, Joey Braden, Milford Creekmore and Cecil Powers apprehended Lowe. He reportedly admitted to being the suspect identified in the camera, and also claimed there were other individuals involved in the theft.

The McCreary County Sheriff’s Office is continuing the investigation and additional arrests may be made. Sheriff Waters added Lowe may be a suspect in another theft investigation and charges related to that case may be levied as well.

The majority of the stolen items have been recovered.