Human remains were found Tuesday morning after local law enforcement officers conducted a search at the base of a cliff line on Day Ridge Road. 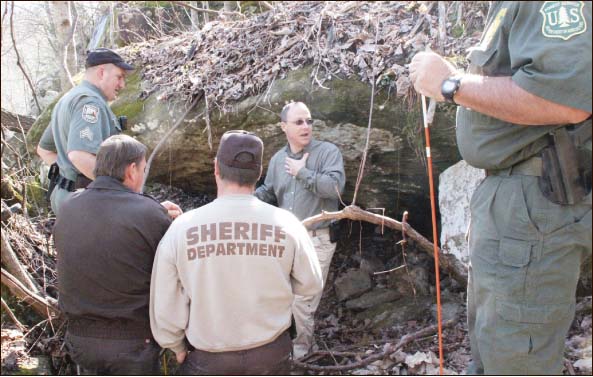 Photo by Greg Bird
Kentucky State Police Detective Billy Correll discusses a plan of action with his fellow officers after human remains were round off Day Ridge Road Tuesday morning.

A homicide investigation has been initiated following the discovery as foul play in the death is certainly suspected due to the conditions the body was found in.

McCreary County Sheriff Randy Waters stated the Wayne County Sheriff’s Department had received information that pointed to the possible location of a body through a separate investigation. That information was shared locally, and on Tuesday morning 16 officers, representing seven law enforcement agencies, began searching the area identified by the source.

After less than an hour of searching, the remains were found hidden away under a rocky overhang near the base of the cliff.

The body had been wrapped in what appeared to be a blanket, and secured with duct tape and an extension cord. Several rocks were also placed on top of the body in an apparent attempt to conceal the remains.

McCreary County Coroner Tim Corder said due to the state of decomposition the corpse exhibited, he estimated the body had been in that location for several months at the least.

Corder was unable to state if the victim was male or female due to the condition of the body, and the fact theywanted to disturb the remains as little as possible to preserve forensic evidence.

Corder stated an autopsy performed Wednesday was inconclusive and a forensic anthropologist would have to be brought in for further investigation into the remains.

Kentucky State Police Detective Billy Correll, who is leading the investigation, could not confirm if officers knew the possible identity of the victim, and stated DNA tests would most likely have to be performed for positive identification. Those tests may take up to a year to be completed.

The body was located near the home of Anthony Murphy, who was arrested in January after pulling a gun on officers during an unrelated investigation.

Following the discovery officers obtained a search warrant for a Murphy’s residence with the intention of finding evidence that may help lead them to gather more information in the case.

Sheriff Watters confirmed that there is currently an open investigation on a missing persons case dating from April of last year concerning Murphy’s son – Charles Murphy, but could not confirm that the body found was that of the missing man.