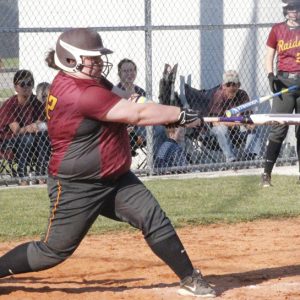 Shadonna Boyatt takes a cut at a Scott County pitch. 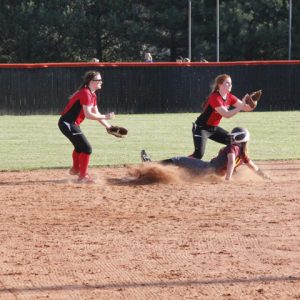 Ally Anderson slides into second base on a stolen base. 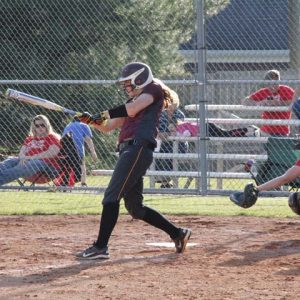 Macey Welchel drives in a run.

After a 20-0, 3-inning win over Scott County Tuesday night the Lady Raiders have started the 2016 season on solid footing, fighting their way to a 5-5 record over their first few games.

It was their second win over Scott in the past week, following a 5-3 comeback win over the Lady Highlanders on Saturday at the Don Franklin Showcase Tournament held at Southwestern High School on Saturday.

In the first match-up, Scott took a 1-0 lead in the top of the third after a walk, fielders choice and an error.

The Highlanders added another run in the fourth thanks to four hits in the frame. Scott could have broken through for more runs in the inning, but a nice outfield assist from Cyndol Kiser and a pair of timely strikeouts held them in check and left two runners stranded when the inning ended.

The Lady Raiders were held hitless through the first three innings as they struggled to adjust to the Scott County pitching, but their bats finally woke up in the bottom of the fourth.

Kiser belted a two-out double to left, and scored after Macey Welchel reached on an error. The tying run scored on a stolen base attempt as the catcher threw the ball into the outfield, allowing the runner to cross the plate on the play.

The Highlanders regained the advantage in the top of the fifth following a pair of two-out hits.

The Lady Raiders took the lead for good in the bottom of the sixth.

Ally Anderson led off the inning by reaching on a single, and advancing to second on a stolen base. A Reagan Kidd single to left put runners on the corners for Kiser, who drove in the tying run on an infield ground-out. Welchel would drive in the go-ahead run after reaching on an error, then advanced to third base on a passed ball and would score on an infield error.

Scott County would get a runner on second in their final at-bat in the seventh, but she was stranded after two infield put-outs to seal the win.

In their other two games in the tournament, the Lady Raiders dropped a 2-1 heartbreaker to Oneida to start the day, and closed out the day with a 10-0 loss to Southwestern.

With construction still underway of their new softball complex, the Lady Raiders continue their lengthy road-trip to start the season this week as they travel to Lincoln County on Thursday. The will play in Russell County Saturday, taking  part in the Lady Laker Classic.

Their home opener is scheduled for Saturday, April 9, when they host Barbourville at 12:00.