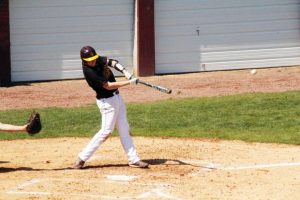 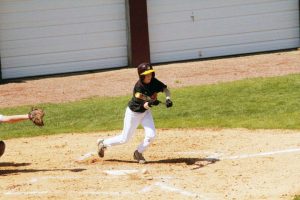 Photo by Greg Bird Blake Corder drops a bunt in the seventh inning of the Raiders’ game against Pulaski County on Saturday.

The Raiders recovered after a pair of weekend losses to rally over the Scott County Highlanders Tuesday afternoon, 9-4.

The win, coupled with a 2-1 victory over Casey County on Friday keeps the Raiders’ record over .500, with a 6-5 record overall.

On Saturday McCreary hosted Pulaski County and Whitley County in a three-game round robin match up.

In the opener the Raiders faced off against the Maroons to start the day.

Pulaski would take a 1-0 lead in the top of the first on an infield single and a wild pitch. The play cost the Maroons a chance at more runs as the trailing runner got caught off base after the score and the Raiders executed a perfect rundown to tag him out to end the inning.

Pulaski would add a pair of runs in the second for a 3-0 lead.

The Raiders responded with a big inning in the bottom of the frame.

Alex West led off the bottom of the second by reaching on an error. Justin Trammel advanced him in to scoring position with a single and a walk to Blake Corder loaded the bases with one out.

West scored on a fielders choice off the bat of Ethan Stephens, while Trammell was forced out at third. Nathan Goins loaded the bases for a second time after getting hit by a pitch.

Cole Kidd cleared the bases with a two-out double to deep left-center field, giving the Raiders a 4-3 lead.

Pulaski would regain the lead in the top of the fourth, plating three runs, and added a pair more in the fifth, one in the sixth and three in the seventh for a 12-4 lead.

McCreary tried to mount a late-game rally in the bottom of the seventh.

Corder started the rally by reaching on an error, followed by a Stephens walk. Goins drove in Corder with an infield single, but Stephens was caught in a run-down for the first out. After a fly-out to center, Trysten Adkins drove in Goins with a single to left, but hey couldn’t keep the runs going as a fly ball ended the game with a 12-6 Pulaski County win.

In the evening game Whitley County, coming off a 3-2 win over the Maroons, knocked off the Raiders, 14-1.

McCreary will host Williamsburg on Thursday, then face the Yellowjackets again on their field Friday afternoon. On Saturday they travel to Burgin County for a doubleheader, and will play at Cumberland County next Tuesday.