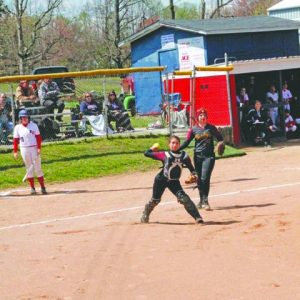 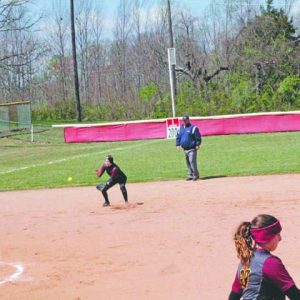 Cammie Gilreath sets up to field a grounder at short. 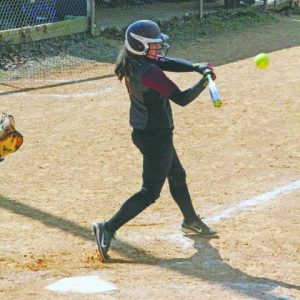 A chilly and blustery weekend didn’t turn out well for the Lady Raiders as they dropped a trio of games in the Lady Laker Classic at Russell County on Saturday.

With wind gusts upwards of 25 miles per hour putting a chill in the air and making conditions difficult for all teams throughout the day, McCreary faired the worst – dropping three games to drop to 6-9 on the season.

In their first contest of the day, the Lincoln County Lady Patriots knocked off McCreary 13-3.

In their second game, against host Russell County, McCreary managed only three baserunners over five innings as they fell 14-0.

Facing Adair County in the third contest the Lady Raiders gave up a run in the top of the first, but had an opportunity to take the lead in their half of the frame.

McCreary loaded the bases on singles from Reagan Kidd and Cammie Gilreath, and an Adair error allowing Cyndol Kiser to reach.

Macey Welchel hit into a fielders’ choice, forcing the lead runner out at the plate, followed by a pop out and a strike out to end the threat.

Adair broke through in the second on an 8-run, 8-hit inning to take a 9-0 lead, then added a pair more in the top of the third.

The highlight of the weekend came in the third inning. Cyndol Kiser and Cammie Gilreath led off the frame with back-to-back singles, bringing up Macey Welchel. The Freshman hurler launched an Adair County pitch into the cross-wind over the right field fence for a 200-foot-plus three run homer.

McCreary allowed two more runs to cross the plate  in the top of the fifth for a 13-3 Adair win.

McCreary’s game against Oliver Springs, scheduled for this Saturday has apparently been canceled, so the Lady Raiders will travel to Barbourville to play a double-header.

Their home opener will now be on Tuesday when they will host Whitley County.