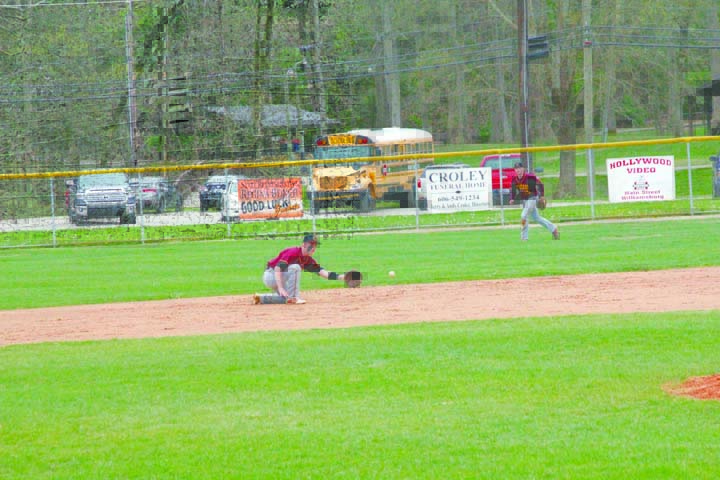 Photo by Greg Bird Nathan Goins gets down to field a ground ball against Williamsburg Friday. The Jackets rallied in their last at-bat to steal a win. 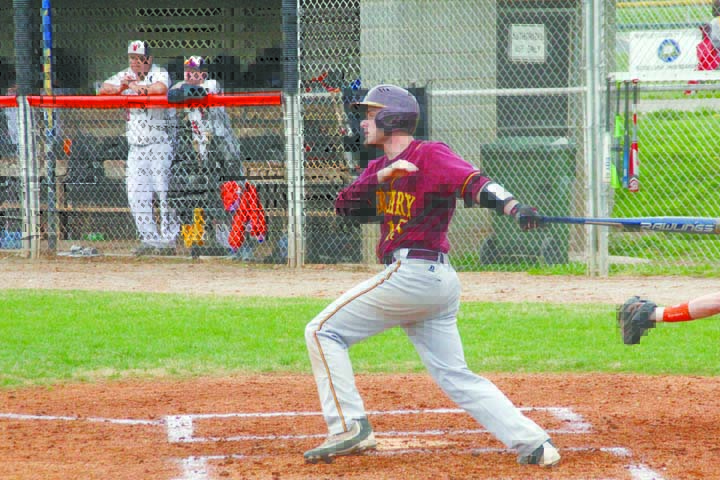 Photo by Greg Bird Ethan Stephens tried to help his own cause Friday, scoring 2 runs, driving in 2 and reaching base four times in five plate appearances.

Ethan Stephens was looking for his fourth complete-game win of the season Friday night; and for six innings it looked as if the McCreary Central Senior would handily accomplish that goal.

But the Williamsburg Yellowjackets’ 3-run rally in their final at-bat spoiled Stephens’ impressive outing and sent the Raiders to an 8-7 loss.

Going into the bottom of the seventh inning Stephens had allowed only six hits and struck out 12 batters as the McCreary bats provided him a 7-5 lead. Of the Jackets’ five runs to that point, only two were earned as the Raiders fought hard for the win.

But Williamsburg broke through in the seventh, with the first four batters reaching safely, followed by a one-out flare to left field driving in the tying and winning run.

The Raiders made an early statement that they were out to win.

McCreary took a 1-0 lead in the first inning after Cole Kidd, who reached on a single, scored on a two-out outfield error.

Zech Moore continued the scoring in the top of the second – leading off with a base-hit, advancing on an Alex West sacrifice and Blake Corder single, before crossing the plate on a Stephens single that gave the Raiders a 2-0 lead.

Williamsburg took advantage of two McCreary errors and a pair of seeing-eye singles in the bottom of the third inning to score 3 runs and take a brief lead, 3-2.

The Raiders answered with 2 runs in the top of the fourth to regain the advantage.

Stephens reached on a one-out walk, followed by a Nathan Goins base-hit, sending Stephens to third base. A wild pitch scored the first run and allowed Goins to advance to third. McCreary loaded the bases after Kidd walked and Trysten Adkins was hit by a pitch. A balk scored Goins for a 4-3 Raider lead before Williamsburg got out of the inning.

A 3-run fifth gave the Raiders a comfortable 7-3 lead as the first seven batters reached safely to start the inning.

Moore started things rolling by drawing a walk, followed by West getting hit by a pitch. Corder loaded the bases on a fielders choice, and the first run scored off the bat of Stephens who hit a sharp grounder to short, which resulted in a force-out at third. A Goins single to left scored Corder, and the final tally came off an Adkins infield grounder.

Williamsburg added a run in their halves of the fifth and sixth innings to draw within 2-runs of the lead.

The Raiders had chances to pad their lead in each of their last two innings, getting runners into scoring position in each frame, but Williamsburg managed to get out of trouble each time.

The Raiders followed up the loss by dropping a pair of games Saturday at Burgin, 6-5, 4-3, and a loss at Cumberland County 4-3, on Tuesday and hold a 6-9 record.

McCreary travels to Jackson County Thursday and Jellico on Friday, before returning home next Tuesday to host Lynn Camp.