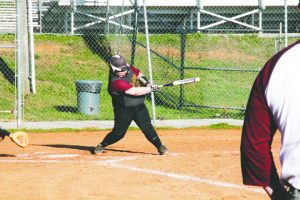 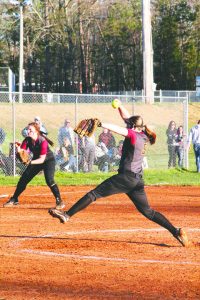 For the first time this season, after 15 games and nearly a month of road trips, the Lady Raiders got to play on their home field Tuesday night.

With construction of a new softball complex underway at their home field, the Lady Raiders had been forced to open the season on the road.

The construction still impacted the game, as all fans were confined to either beyond the outfield fence or along the third-base outfield line – but plenty of softball supporters were on hand to cheer McCreary to a 9-4 win over Whitley County.

The Lady Colonels struck first, plating a run in the top of the second thanks to an infield error, single and ground out.

But the Lady Raiders answered with a 5-run at-bat of their own in the bottom half of the frame.

After a lead-off ground out started the inning, the next 8 Lady Raider batters reached safely, setting off an offensive explosion. A Sierra Whalen walk with the bases loaded drove in the first run, followed by a line-drive single from Emily Simpson that drove in a pair, and gave McCreary the lead for good.

Ally Anderson was hit by a Whitley County pitch to load the bases for a second time, then Reagan Kidd and Cammie Gilreath followed with run-scoring singles to put the Lady Raiders ahead 5-1.

Cyndol Kiser just missed clearing the bases with a deep blast to centerfield, but a nice catch robbed her of some sure RBI’s, and also caught Kidd off second base for an inning-ending double play.

Whitley County would add a pair of runs in the top of the third to close the gap to 5-3 before McCreary got out of the inning without further damage.

McCreary would add an insurance run in the bottom of the fifth when Macey Welchel scored on a wild pitch.

The Lady Raiders put the game away for good in their half of the sixth.

Anderson started the inning reaching on an error, stole second and would later score on a wild pitch. With two outs and the bases clear, Kiser was hit by a pitch, followed by Welchel reaching on another error.

Shadonna Boyatt smashed a stand-up double to left field, scoring both runners ahead of her for a 9-3 lead.

Whitley County would try and rally in their last at-bat, scoring one run, but a nice double play ended the threat, and end the game with a McCreary County win.

The win gave the Lady Raiders a 7-9 record.

The Lady Raiders are scheduled to play at Southwestern Friday evening, then will host Scott County on Monday and Jellico on Tuesday.