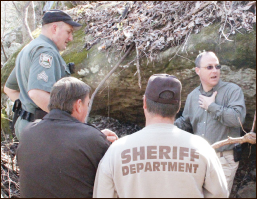 Photo by Greg Bird
The KSP have identified the human remains found late last month off of Day Ridge Road as those of Charles R. Murphy.

The Kentucky State Police reported Friday that they have made a positive identification in the case of the human remains found last month in northern McCreary County.

In a press release issued Friday, the KSP confirmed the remains were those of Charles R. Murphy, 26. Murphy had been reported missing to the McCreary County Sheriff’s Office in June of last year.

Detective Billy Correll stated Monday the identification was made, with the assistance of the Kentucky State Medical Examiner and Tennessee Department of Forensic Anthropology, through the use of dental records.

The investigation in to the cause of death is proceeding, with results expected to be released within the next few weeks.

Detective Correll confirmed the case is being investigated as a homicide, but could not provide any additional details into the investigation.

Murphy’s remains were found on March 29 when law enforcement officers located the body after a search was conducted following receiving information pointing to the possible location of the body.

The remains were discovered under a rocky overhang close to the base of a cliff, near the residence owned by Murphy’s father – Anthony Murphy. The body was found wrapped in a blanket or carpet, and secured with duct tape and an extension cord. Several rocks were placed atop the remains in what appeared to be an attempt to further conceal the body.

The elder Murphy has been incarcerated on unrelated charges since January.