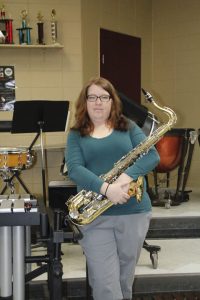 Photo by Greg Bird
MCHS Band Teacher Michelle Simpson was the recipient of a grant for new instruments for the school.

You may remember the 1995 film, Mr. Holland’s Opus, the story of a high school music teacher, played by Richard Dreyfuss, who inspired a generation of students with his passion and enthusiasm in the classroom and beyond.

That spirit lives on at McCreary Central as it has been chosen to receive a donation through a foundation formed in the film’s honor to help school music programs with donations of new instruments.

The Mr. Holland’s Opus Foundation announced this week that MCHS, and Band Instructor Michelle Simpson were successful applicants for a grant for eight new musical instruments to be added to the school, which will help expose new students to band.

Through the grant, valued at over $20,000, the school will receive a variety of instruments including; a marching sousaphone, alto saxophone, concert tuba, trumpet, clarinet, flute, oboe and tenor saxophone.

With many school music programs across the country losing vital funding, the foundation helps under-served schools with minimal budgets by donating new instruments, often replacing some that are more than 30 years old.

Mrs. Simpson said the new instruments will allow the school to expand the Marching Band, and bring more students the opportunity to participate.

“Musical instruments are expensive, and both schools and students struggle to be able to afford them,” she said. “This grant will remove that barrier and allow more students to participate and enhance their education through the musical arts.”

“I am so humble for McCreary Central to be recognized for our program and honored to be a recipient of this grant.”

Mrs. Simpson credited Emmy Sumner for her help getting the grant application process off the ground.

MCHS Principal Sharon Privett echoed those comments and added: “These instruments will make a difference in music education and experiences of our students for years.”

McCreary Central High School was one of only four schools in Kentucky to report a Distinguished Rating for their Arts & Humanities Program Review in 2011.  Since then, the school has maintained a Distinguished Rating.  Recently, McCreary Central High School’s Symphonic Band and Director Michelle Simpson were recognized by the Kentucky Music Education Association for excellence in achieving perfect scores at their Spring Adjudication.

“Learning music in school is a way to engage kids and give them something that makes them better students and better people,” said Felice Mancini, President & CEO of The Mr. Holland’s Opus Foundation.  “They deserve every tool available to help them receive a quality education, and we want to insure that music is in that toolbox.”

The Mr. Holland’s Opus Foundation donates musical instruments to under-funded schools in an effort to give youngsters the many benefits of music education, help them to be better students and inspire creativity and expression through playing music. The organization was inspired by the 1995 motion picture and founded by Michael Kamen, who composed the music for the movie and countless others.  In the last 20 years, over 20,000 instruments have been donated to over 1,360 schools across the country.  More information can be found at www.mhopus.org.