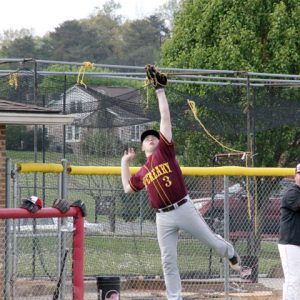 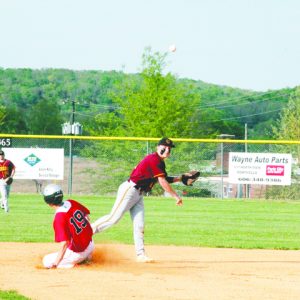 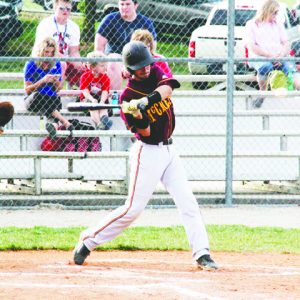 A five-run first inning off the bats of the Wayne County Cardinals proved too much for the Raiders to overcome Tuesday night.

The Cardinals (11-5) started the bottom of the inning with five consecutive hard hit balls, three of them for extra bases, off starter Cole Kidd to help propel them to a 10-0, 5-inning win.

The Raiders settled down after that, holding the Cardinals in the second, and allowing only a single run in the third and two more in the fourth, but couldn’t get enough offense of their own going to prolong the game.

Despite getting only two hits in the contest, the Raiders had their share of opportunities to score, advancing runners into scoring position in every inning except two.

In the first, Nathan Goins reached on a dropped third strike and Kidd followed with a line drive down the left field line for an apparent one-out double. The ball appeared to kick up the chalk on the foul line when it landed, and the Cardinals played it as if it was fair, but the home plate umpire ruled it foul, and Kidd was sent back to the batters box where he eventually walked. Both runners were stranded when Wayne County pitcher Nathan Garner induced a pop-up and a strike out to end the inning.

McCreary loaded the bases with two outs in the second, but a deep fly to left field ended the threat.

Down 8-0 entering the fifth, Goins was hit by a pitch and stole second with two outs. Kidd hit a single to left, but Goins was tagged out at the plate after an outstanding outfield stop and throw to end the inning.

Wayne ended the game on a sacrifice fly to center in the bottom of the fifth, sending the 10th run across the plate.

The Raiders (8-14, 0-2 in District) travel to Whitley County Thursday and Model on Friday. On Saturday they host Model and Cumberland County for a round-robin, and travel to Southwestern on Tuesday.