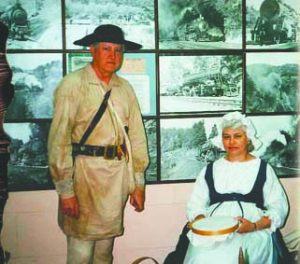 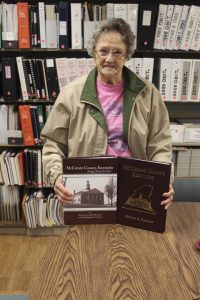 For twenty years, members of the McCreary County Historical and Genealogical Society have been busy researching local family ties and bringing local history alive to those interested in McCreary County’s interesting and colorful past.

Celebrating their twentieth Anniversary this month, members of the organization have played a significant role in making local history easily accessible to the public.  Seeds for the formation of the McCreary County Historical and Genealogical Society (MCHGS) were planted in March 1996 when members of the Pulaski County Historical Society met at the McCreary County Public Library with seventeen local residents interested in forming a historical and genealogical society for McCreary County.

That meeting took root and blossomed into the formation of the MCHGS the following month on April 15, 1996.  Eighteen members were present for the formation meeting.  Temporary officers, President Lorella Wood, Secretary Peggy Wilson, and Treasurer Dorene Murphy, were eager to get the organization involved in the community.  The group’s plan of action included collecting and preserving stories of McCreary County and its people, recording and videoing older residents, and learning and sharing the lifestyle of McCreary County forefathers.  Some of the members volunteered to help those interested in genealogy.

The organization, with assistance from the McCreary County Public Library, has been front and center in supporting public celebrations of local history.  Its members have been active in past McCreary County Heritage Weeks and McCrearyFest celebrations.   MCHGS was instrumental in designing the Folk Life Kiosk display at the Stearns Depot and participated in the ribbon cutting ceremony.  Members make a point to celebrate the birthday of McCreary County’s oldest living citizen and work diligently at collecting family stories.

In 2009, the Bluegrass Chapter of the Army Aviation Association of America contacted the MCHGS about Edward Ward, an aviation pioneer born in Pine Knot in 1881.  The local historical society played a significant role in honoring Ward.  As America’s first enlisted Airman, Ward was almost unheard of in the community.  The MCHGS declared March 31 as ‘Edward Ward Day’ and, later, a historical highway marker was placed on Highway 27 near the overhead bridge in Pine Knot.  A military grave marker was placed by a Confederate re-enactment group at Ward’s father’s tomb at the Pine Knot Cemetery.