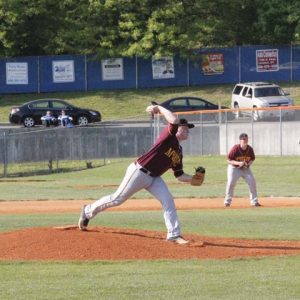 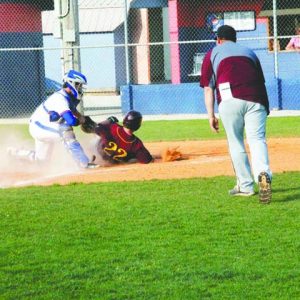 Photo by Greg Bird Gunner Perry slides into home in the Raiders’ loss to Southwestern Tuesday. 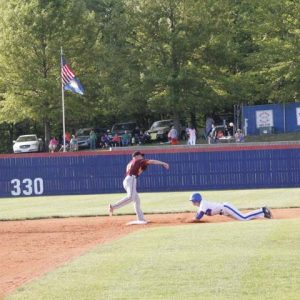 A four-run first inning proved to be enough to propel the Southwestern Warriors to a 15-3 win over the Raiders Tuesday night, though McCreary had chances early to make the game close.

The Warriors sent 10 batters to the plate in the first, which was prolonged by two McCreary errors, scoring four runs off starter Zech Moore on a day when the Raider roster was limited due to injuries and a senior trip

The Raiders rebounded in the top of the second after loading the bases with two outs. Moore drew a one-out walk, followed by Gunner Perry and a walk to Alex West. Blake Corder hit a single to left, scoring Moore, but McCreary’s chances to add additional runs ended when Perry was tagged out at the plate to end the inning.

Moore and the Raiders held Southwestern off the board in their half of the inning and the McCreary offense crept closer when they came to bat in the top of the third.

Ethan Stephens drew a one-out walk and advanced to third on a single from Caleb Dixon. An infield error off the bat of Zach Chaney scored Stephens.

Moore followed with a hit to load the bases. Justin Trammell hit a sacrifice fly to deep center, driving in Dixon, but a baserunning error by the pinch-runner at first ended the rally with the Raiders trailing 4-3.

McCreary only managed one hit over their final two at-bats, another single from Dixon, but the Southwestern defense prevented a Raider comeback.

Southwestern would add a solo run in the bottom of the third, but broke through for 10 runs in the fourth to secure the win.

The Raiders host Wayne County for their final District meeting of the regular season on Thursday; then will return to action next Tuesday at Corbin.