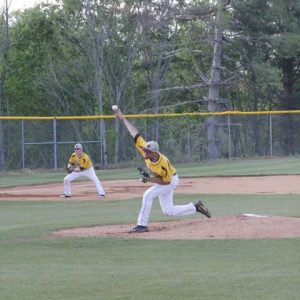 Photo by Greg Bird Caleb Dixon took the mound for the Raiders against the Cardinals. 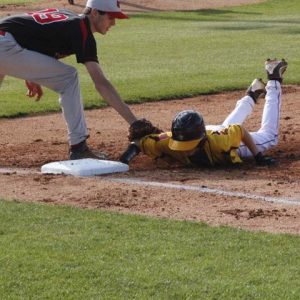 Photo by Greg Bird Raider Blake Corder dives back to the bag under the tag on a Wayne County pick-off attempt in the first inning of the Raiders’ 10-0 loss to the Cardinals last week. 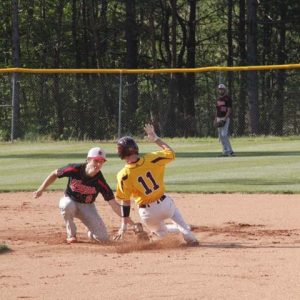 Photo by Greg Bird Nathan Goins slides into second on a stolen base attempt.

In their District second game in three days – each with a shortened roster due to injuries and a senior trip – the Raiders found themselves outmanned against the Wayne County Cardinals Thursday, dropping their final regular season District meeting 10-0.

Things started with a hint of optimism for McCreary in the bottom of the first as Blake Corder reached on a first-pitch single to right, but he was erased on a fielders’ choice off the bat of Nathan Goins. Goins did advance into scoring position on a stolen base, but was stranded on second after two fly outs to right.

Unfortunately for the Raiders, Corder’s hit was the only one for McCreary in the game, and only two other runners would reach base via being hit by a pitch over the next four innings.

Starter Caleb Dixon breezed through the first two innings; retiring the first six batters he faced, before starting to have control issues in the top of the third. Dixon hit three batters, walked one and gave up a run-scoring single before getting out of the inning trailing 2-0.

In the fourth the Cardinals broke the game open.

After their lead-off batter struck out, 7 of the next 8 batters reached, ultimately driving in 5 runs for a 7-0 advantage.

Wayne added 3 runs in the top of the fifth to put the game out of reach.

The Raiders continue this week with a home game against Williamsburg Thursday, and road games at Casey County Friday and Pulaski County next Tuesday.