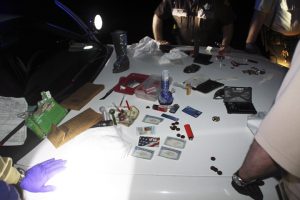 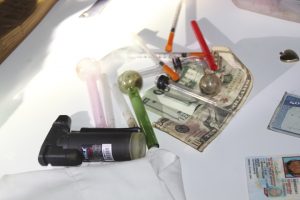 Four people were arrested Wednesday night after Deputy Milford Creekmore conducted a traffic stop on a vehicle suspected to be carrying drugs.

That evening officers had received reports of a white Cadillac that had been “running the roads” and was suspected of carrying illegal substances.

After witnessing the vehicle in question drive erratically, crossing both the center- line and the white line, a traffic stop was initiated on U.S. 27 around 10:30 p.m. Wednesday night.

U.S. Forest Service Officer Tim Grooms was called to the scene with his K9 Officer to assist. The K9 officer “hit” on two locations on the vehicle, and a search of the contents was initiated.

Earlier that evening, on a separate but related case, officers responded to a call of a suspicious person who had been reported to be wandering around a neighborhood.

When officers arrived at the scene they found Charles B. Kennedy, 27, of Somerset on a porch at a residence. The occupant of the residence did not know the suspect and reported he had no business being there.

Deputy Smith, who made the arrest, stated the suspect was “very tense” and reportedly stated he wanted the officers to shoot him. When attempting to take Kennedy in to custody, he began to resist and fought with officers.

After being restrained he admitted he had taken methamphetamine in the past.

When he was placed in the back of the police cruiser, Mr. Kennedy produced a lighter he had secreted somewhere on his person, and reportedly tried to light a fire in the vehicle.