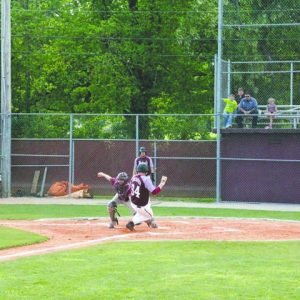 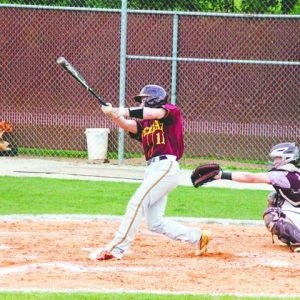 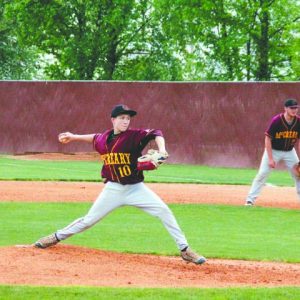 Blake Corder took the mound in relief of the 7-1 loss.

On a gusty day in Pulaski County the Raiders struggled with their offense as they fell to the Maroons, 7-1.

Pulaski took an early lead off McCreary starter Ethan Stephens, scoring two runs in the bottom of the first inning thanks in part to a wind-aided bloop single and a fielding error with the bases loaded. Stephens settled in after the runs scored, getting out of the inning without further damage.

The Maroons added three more in their half of the third and two in the fourth to take a 7-0 lead.

The first 8 McCreary batters went down in order until Alex West worked a two-out walk off Pulaski starter Jacob Clark. West alertly stole second, then advanced to third on a single from Blake Corder, but the Maroons managed to get out of the inning without allowing any runs.

The Raiders finally broke free in the top of the fifth, but only were able to squeeze one run across the plate.

Ethan Stephens led off with a single to left, followed by a one-out base hit from Justin Trammel. West loaded the bases after being hit by a pitch, and Corder drove in the runner from third on a fielders’ choice. Nathan Goins was the second victim of the inning being hit by a pitch and loaded the bases again, but Pulaski escaped by inducing a pop up to end the inning.

McCreary saw their final chance to get back in to the game end abruptly in the top of the seventh. Trammell led off the inning reaching on an error, and was replaced by a pinch runner. Corder drew a one-out walk to put runners on first and second when Goins hit a pop-up beyond short. With a strong wind blowing in from the outfield, the ball hung in the air long enough for the fielder to make a play on the ball and throw to second after the catch to nab the runner off base for a game-ending double play.

McCreary’s record dropped to 9-21 with the loss.

McCreary will play four of their last five regular-season games at home. On Thursday they host Corbin, followed by Bell County on Friday. Next Tuesday they will travel to Garrard County before closing out the schedule on Thursday and Friday with games against Whitley County and Clinton County. Friday will also be Senior Night for the Raiders.