Essential tips to keep nuisance bears from knocking at the door 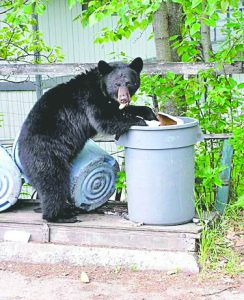 After going without much food throughout the winter months, it’s time for voracious black bears to make their appearance throughout McCreary County and elsewhere as they look for food.  Leaving their winter dens hungry, bears often have difficulty finding natural food during the early spring months.  Easy meals such as pet food or garbage left out overnight, food scraps thrown in yards, bird food in feeders, or coolers left unattended give bears wonderful opportunities to enjoy picnics without having to work very hard.

It’s not surprising that spring in McCreary County is heralded by a predictable increase in the number of nuisance bear reports, correlating with a growing black bear population.

“At this time of year, black bears are beginning to be more active and are out looking for food,” Mike Strunk, Kentucky Fish & Wildlife biologist commented.  “As long as they have a food source, our male bears remain fairly active through the winter months; however, the reports of nuisance bears pick up in the spring because it is the worst time for availability of food.  The bears cover more ground looking for something to eat.”

U. S. Forest Service Wildlife Biologist Joe Metzmeier concurred.  “Black bears are roaming a wider than normal range now.  Right now, bears are out trying to find food and get their bellies full.”

“This is the time of year when mother bears chase away their young,” Strunk remarked.  “Cubs spend about a year with their mothers teaching them how to survive.  In March or April, after leaving the den for the second winter, it is time for the cubs to get out on their own.  The mother bears will keep them around for a short time during the second spring before running them off. ”

According to both Strunk and Metzmeier, black bears are very timid creatures who are normally scared of humans.   Generally, black bears will run off when they have a close encounter with people.  However, problems arise when bears become acclimated to humans and their food or when they feel cornered or trapped.

“It’s a lot easier to take steps to avoid creating a nuisance bear problem than it is to correct it,” Strunk, emphasized.  “Once a bear loses that natural fear of people and gets accustomed to looking for easy food sources created by humans, it’s hard to correct the problems that occur.”

Bears have a highly developed sense of smell and remarkable memories.  In hopes of finding a tasty treat, they will often return in the spring to garbage cans raided earlier in the fall.

First, homeowners need to avoid keeping any type of garbage outside.  Garbage for pick-up should not be placed at the road-side overnight but should, instead, be placed out on the day of pickup.

Pet food should be kept indoors, and animals being fed outdoors should be given only the amount of food they can eat.  Automatic feeders are discouraged.

Food scraps should not be tossed in a yard or “over the hill.”

Use electric fencing to discourage bears from roaming around bee hives, gardens, and fruit trees.

When responding to bear complaints, officials first work with the landowner by providing technical assistance by phone or conducting a visit.  Efforts are made to correct the problem including the removal of any food sources, assisting with fencing, etc.

“Typically, if a landowner removes an attractant (food source, etc.), the bear will move on,” Strunk commented.  “If the bear doesn’t leave, we may try hazing the animal with non-lethal ammunition to break the habit of the bear getting food without negative consequences.  As a last resort, we may trap and relocate a nuisance bear, but that is usually not successful.  Bears, with their sense of smell and amazing memory, simply find their way back home or find new locations to continue their nuisance behavior.”

Strunk encouraged the public to report sighting of bears because those reports help wildlife management officials determine the location and number of bears in the area.