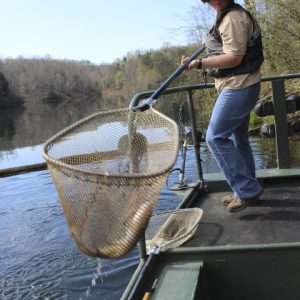 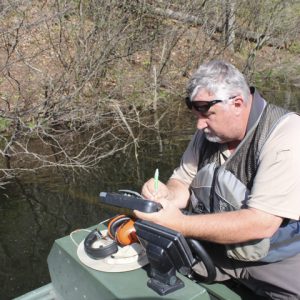 In addition to guiding a fishing boat equipped with electric booms around the Laurel Creek Reservoir during a recent fish survey, Kentucky Fish and Wildlife Technician Danny Parks kept track of data gathered from the captured and released largemouth bass. 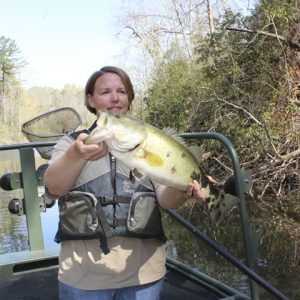 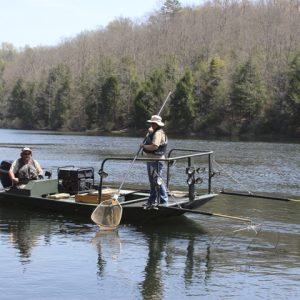 With the sun shining and wildflowers blooming on the banks of the Laurel Creek Reservoir, Kentucky Department of Fish & Wildlife’s  Fish Biologist Marcy Anderson and Fishery Technician Danny Parks chose the perfect day to survey the large-mouth bass population residing in the McCreary County body of water.

With Parks deftly maneuvering the fishing boat, equipped with electric booms, around the edges of the reservoir and periodically releasing four amps of electrical current into the water, Anderson swiftly netted the slightly stunned large-mouth bass from the water and into the boat’s dry well.  After measuring the length of each fish, Anderson released the captured bass, sun fish, and blue gills back to swim freely in the water of the reservoir.

With a total of 170 fish captured and released, the two netted fish ranging from two to twenty-one inches.  The Laurel Creek Reservoir is a favorite local fishing hole and is currently being developed for enhanced recreational use.