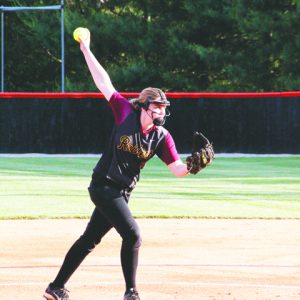 Photo by Greg Bird Macey Welchel took the mound for the Lady Raiders in their 11-1 loss to Wayne County Lady Cardinals in the opening round of the 48th District Tournament. 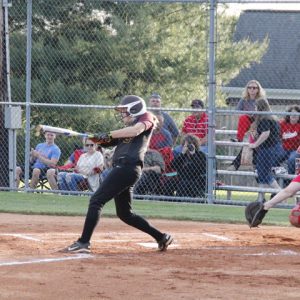 Macey Welchel drives in a run with a sacrifice fly. 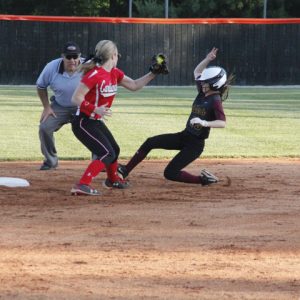 West gets tagged out at second on a steal attempt 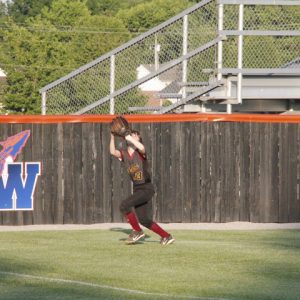 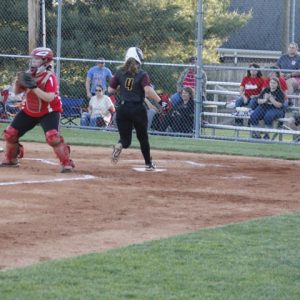 The Lady Raiders’ season ended in disappointing fashion Monday night during the opening round of the 48th District Softball Tournament. The Wayne County Lady Cardinals benefited from 7 unearned runs as the McCreary defense struggled on the field, and Wayne County took the game 11-1.

The McCreary offense was also practically non-existent in the contest, recording only 2 hits, and gaining only 6 baserunners all game.

Starting pitcher Macey Welchel went the distance for McCreary, allowing 8 hits, 5 walks and striking out 4 batters. Of the 11 runs she allowed, only four were earned.

The game was scoreless until the bottom of the fourth when McCreary took a 1-0 lead.

Ally Anderson led off the frame with a single to right, and advanced herself in to scoring position by stealing second and third. Welchel helped her own cause with a sacrifice fly to left that scored the go-ahead run.

Lady Raiders’ Coach Todd Waters was very happy to see the run cross the plate, noting the pressure was off, and hopefully the girls could relax and start hitting the ball.

But Wayne County reapplied the pressure in the top of the fifth.

McCreary retired the first two batters of the inning, but a triple, a walk and a double from the next three batters tied the game 1-1. Another walk, followed by an outfield error drove in two more runs, and a mental error on an infield grounder plated a fourth, for a 4-1 Wayne County lead.

But the wheels really came off the wagon in the top of the 7th as Wayne County sent 13 batters to the plate and scored 7 runs to take an 11-1 lead and effectively put the game out of reach.

McCreary almost escaped the inning without harm, but a string of errors allowed the Cardinals to break the game open.

Taylor Bell led off the frame with a single to right, and a sacrifice bunt advanced her to second. Welchel walked the next batter she faced, and gave up a second hit to load the bases. Cassi Bell followed with a sharp grounder hit right back to Welchel, who threw home for the force play at the plate, and recording the second out of the inning.

Then the trouble started. An infield error allowed two runs to cross the plate, followed by four more errors during the next four at-bats, which brought in five more runs before the Lady Raiders could escape the inning.

In all, McCreary committed 8 errors in the contest but Coach Waters used them as a teaching experience after the game.

“We can’t focus on the last play,” he told the team afterwards. “We have to learn to put it behind us and keep fighting.”

“We have accomplished a lot this season,” he added. “We have to build on it and come back next year and be better.”

“I am very proud of all of you for what we did accomplish this season.”

The Lady Raiders ended the season with a 15-17 overall record.