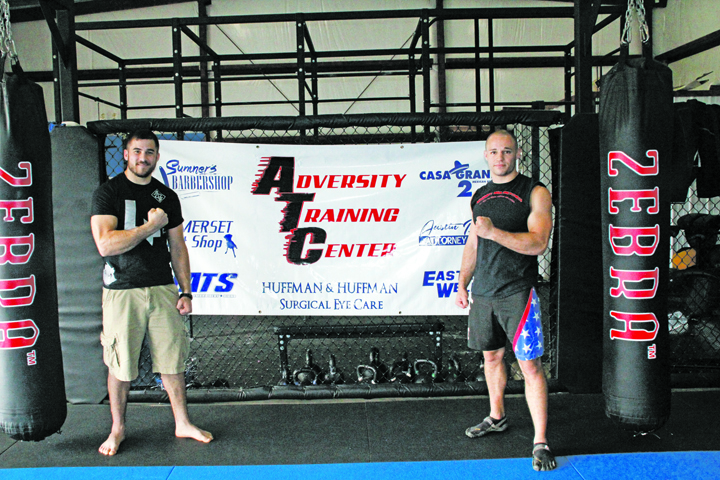 Photo by Greg Bird
Will Ewers (left) and Ian Lawler (right) fought Frankfort red tape in a battle that could benefit the entire state.

A new commission governing the professional boxing and wrestling industry has been formed that could open up the Bluegrass state to hosting more events and bringing in much needed revenue.

Some of the credit for the move by Governor Matt Bevin earlier this month can be placed at the feet of McCreary Central Graduate Ian Lawler and his business partner William Ewers.

The pair of Mixed Marshal Arts enthusiasts and fighters spent the better part of a year battling with a Kentucky agency to get their license to fight professionally in the state.

The struggle began last September when a fight promoter in Corbin submitted applications for the duo to take part in an event, only to have to cancel their scheduled fights because the applications were denied – without any reason.

Lawler’s parents, Austin and Darlene Price, who coincidently are attorneys, took up the battle.

Price petitioned the Kentucky Boxing and Wrestling Authority for a chance to appeal the decision. That began a months-long ordeal of political red tape, postponements and unexplained cancelled meetings.

The head of the Authority, Todd Neal, who by his own admission has no experience in boxing, wrestling or Mixed Marshal Arts, even at one point made disparaging remarks to the Twenty Nine Palms Marine base where Lawler and Ewers served, coached and taught Jiu Jitsu to much acclaim.

That didn’t go over well with the two proud veterans to say the least.

Neal also reportedly tried to shrug off issuing a Kentucky license, stating the men had a Tennessee license, so why didn’t they just go fight in another state?

“One guy was the master decider, who didn’t have any experience with MMA,” Lawler said. “Meanwhile Kentucky is missing out on millions of dollars in potential revenue – all due to one person.”

Price decided to go above the Authority’s head and petitioned the Deputy Chief of Staff of the Lieutenant Governor to set up a meeting with the Secretary of the Public Protection Cabinet.

Lawler and Ewers’ struggles  and protests apparently did not fall on deaf ears.

The move should pave the way to open Kentucky to host more professional boxing, wrestling and MMA events.

Due to what was viewed as archaic and strangling regulations, most big events have stayed away from the state.

WWE last event in Kentucky was in 2010, and has since refused to return after being fined for having a wrestler bleed during the event.

The two young men, both well-respected military veterans, also own and operate the Adversity Training Center in Somerset (704 Monticello Street), and are excited about the opportunities it could bring, not only to their gym, but to the region.

“I’m most concerned about bringing fights to Somerset,” Lawler said. “If we can bring in these events, it will bring taxes and revenue to the city.”

“It is a perfect opportunity, not only for our gym, but for Somerset and the region.”

Negotiations with the Center for Rural Development, which would be an ideal place to hold fights according to Lawler, have begun, but look doubtful due to the curfew imposed by Center officials.

The team has also talked with local schools, which could not seat as many people, but they seen receptive to allowing events to be held.

“I’ve been all over the world, and I’d like to get a few more fights in,” Ewers said. “But I’d trade it all to save someone else the headache we went through.”

The pair have been considering expanding their gym, possibly building a new and larger facility to accommodate their growing membership, and the new Commission certainly can help fulfill that dream.

“We couldn’t have imagined expanding under the old board,” Lawler said. “We owe it to Governor Bevin interceding.”

“What these guys did paved the way for professional MMA fighters in Kentucky,” Price said.