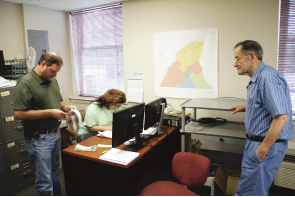 Photo by Greg Bird
County Clerk Eric Haynes and his staff re-tabulated the votes from the Democratic Presidential Election after Bernie Sanders requested a recanvass in Kentucky.

Last Thursday McCreary County Clerk Eric Haynes, along with Clerks in all 120 Kentucky counties revisited the Primary Election results to conduct a recanvass of the votes cast in the Democratic Presidential Primary.

Candidate Bernie Sanders requested the recanvass due to the closeness of the contest between him and Hillary Clinton in the overall state totals.

Clinton beat Sanders by fewer than 2,000 votes, or only 0.2 percent of the total.

But, as a result of every county and voting precinct re-tabulating the votes on the election machines and absentee ballots, no discrepancies were discovered and the final totals remained unchanged.

“A statewide recanvass of the votes was conducted in the May 17 Democratic presidential primary election and the results did not change the outcome of the election,” the statement read. “The results remain unchanged from the totals certified by county boards of elections to the secretary of state last week, as required by law.”

In requesting the recanvass Sanders campaign stated they simply wanted to re-check the vote totals due to the closeness of the final results, and did not allege any improprieties or misconduct occurred.

Locally, Haynes was confident there would be no changes in the McCreary County vote totals due to the diligence of his staff and measures they take to count votes.

In addition to tabulating the votes via upload from each individual voting machine used in the election, Haynes utilizes three additional staff members to manually and independently count the votes. At the end of the tabulation process, if all three totals and the computer readout do not match, they identify and correct any errors that may have been made before finalizing the vote.

Haynes says it is becoming more and more rare for Clerks to use manual tabulation, but he feels it is a way to assure the voters of McCreary County that their votes have been counted properly.

“Other Clerks around the state ask me why we do it this way,” Haynes said. “I believe it tells the people who vote that we care about their rights, and want to make sure that it is counted properly.”

While Clinton took Kentucky by 1,923 votes, Sanders won the local vote totals, pulling in over 50 percent of the ballots to Clinton’s 41 percent.