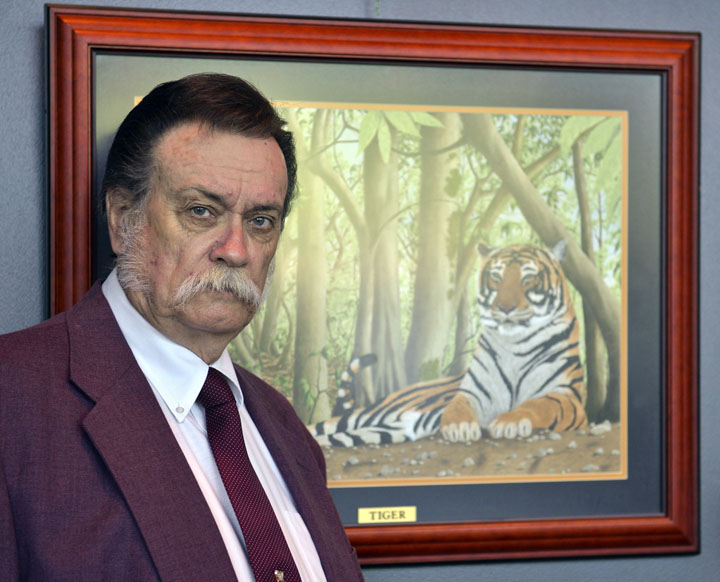 Photo submitted Lake Cumberland Performing Arts, in partnership with The Center for Rural Development, invites the public to meet wildlife artist James “Jay” Perkins of Monticello and view his work at an artist reception on Thursday, June 16, from 5 p.m.-6:30 p.m. at The Center in Somerset.

For wildlife artist James “Jay” Perkins of Monticello, the attention is in the detail.

Perkins, a self-taught artist, typically spends up to four months on a single oil painting perfecting every detail, down to the last leaf or grain of sand, and making sure the wildlife captured in his work is portrayed in its natural habitat.

“The number one thing that drives me is accuracy and detail,” Perkins, who has been painting since the age of 10, said. “I can’t stop painting details.”

In his oil painting of the Tiger Swallowtail butterfly, which took three months to complete, Perkins painstakingly paints each grain of sand to give viewers a “real-life experience” of this magnificent yellow-and-black stripped butterfly depicted in its natural environment.

A collection of Perkins’ artwork spanning his 20-plus year career, including the majestic oil painting of the Gray Wolf, one of his most popular pieces, is now on display at The Center for Rural Development in Somerset.

Lake Cumberland Performing Arts, in partnership with The Center, invites the public to meet Perkins and view his artwork at an artist reception on Thursday, June 16, from 5 p.m.-6:30 p.m. in the front lobby of The Center.

“We are excited to have Jay as our featured artist in our visual arts exhibit at The Center,” said Dianna Winstead, associate director of arts, culture, and events at The Center. Perkins developed a strong interest in wildlife at the age of four when he became fascinated with a flock of birds of all colors and descriptions perched on an electrical line near his grandparents’ home in McCreary County.

“That blew my mind,” Perkins said. He got his first paint-by-numbers set at 10, but said he quickly realized he could paint outside the lines and do a better job than the manufactured kit. He continued to “dabble” in art, but really began to pay attention to painting with details in high school.

Perkins put his talents to work as a painter for the Flasher Neon Sign Company in Somerset, where he worked for 30 years. He also performed regularly with a country music band at Renfro Valley. After his retirement, Perkins has been working on his craft as an oil painter.

All of the oil paintings on exhibit at The Center are available for sale as well as prints of each piece. For more information on purchasing one of the pieces in the exhibit or a print, contact Dianna Winstead, associate director of arts, culture, and events, at 606-677-6000 or Jay Perkins at 606-278-3920.

The collection will be on exhibit through July 19 at The Center and is free and open to the general public. The exhibit hours are 8 a.m.-5 p.m. Monday through Friday and during extended evening and weekend hours when The Center is open to the public.