The Kentucky State Police reported two people died as a result of a collision between an ATV and a pickup truck Saturday afternoon in Pine Knot. 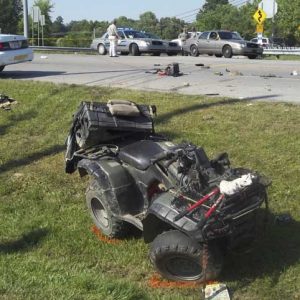 Photo by John King The driver and passenger of this ATV died as a result of a collision with a pickup truck on U.S.27 Saturday afternoon. 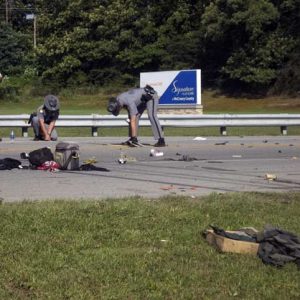 KSP Troopers investigate the scene of the accident. (Bot The truck was hit on the right-front side. 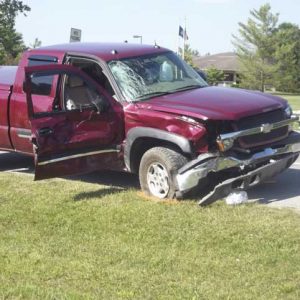 The accident occurred around 3:15 p.m. Saturday afternoon at the intersection of Cal Hill Spur and U.S. 27 in Pine Knot near Wilson’s Quick Stop.

According to the report, Tony Dewayne Myers, 43, of Hellenwood, Tennessee, was operating a Honda ATV eastbound on Cal Hill Spur Road. Myers apparently attempted to cross U.S. 27, but entered the path of a 2004 Chevrolet pickup, operated by John Chitwood, 72, of Whitley City.

The impact ejected both Myers and his passenger, identified as Geneva J. Ridener, 45, of Whitley City on to the roadway.

Chitwood was transported to Lake Cumberland Regional Hospital, where he was treated for minor injuries.

Neither occupant of the ATV were wearing a helmet at the time of the crash, and alcohol use is considered a factor in the collision.