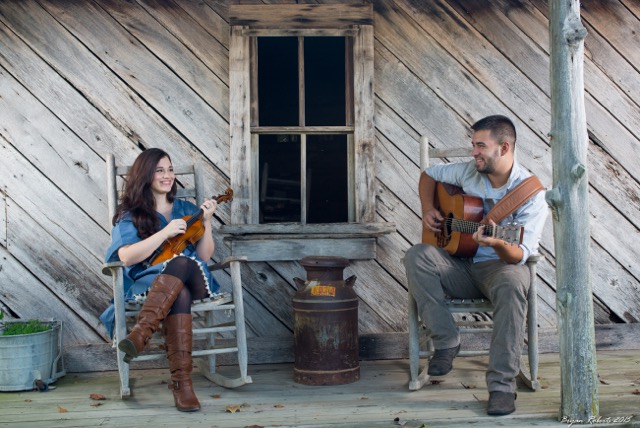 The recent signing of the bluegrass/gospel group, Kentucky Mountain Trio, to the Mountain Fever Records label is another step on the road of success for twenty-two year old McCreary County native Heidi Douglas Greer.  Heidi is the sole remaining member of the original group formed in 2008 in McCreary County when she was just fourteen years old.  The original trio, consisting of Heidi and fellow McCreary Countians Cody Canada and Israel Clark, transformed throughout the years and Heidi, at the forefront of the group as lead vocalist and fiddle player, is currently the only native McCreary Countian associated with the group.  She is joined by her husband, Ryan, who plays guitar and sings harmony, Matt Cromer on Dobro, Brian Davidson on bass, and Nathan Adcock on Cajon.

Heidi, the daughter of Gary and Gladys Douglas, grew up on Rattlesnake Ridge and graduated from McCreary Central High School.  As a singer, her breathtaking vocals have been compared to that of Sonya Isaacs and Allison Krauss.  Despite the impressive comparisons, the nuances and timbre in Heidi’s note selection are distinctly her own.

The group’s yet to be named, debut album is due for release this fall and will include six gospel and six secular songs.  Their unanticipated signing with Mountain Fever Records came about as a result of Kentucky Mountain Trio’s showcase appearance at the SPBGMA in Nashville in February when Mountain Fever’s Mark Hodges was told that he needed to “get up there quick” as the group performed.

“When I arrived, I heard the last chorus of the last song of performance by Kentucky Mountain Trio,” Hodges explained.  “Everyone kept telling me I should have been there earlier, and that I really missed out.  I spoke with Heidi and Ryan afterwards, and I began researching their music.  It didn’t take long to figure out why people were so moved by this group.  I contacted them, and we worked things out rather quickly.  All of us at Mountain Fever are very excited about what the future is sure to hold for these fine young people.  Their music is simple and direct but accentuates the emotion and heart-felt presentation of this young girl’s heart-stopping vocal delivery, supported by a wonderful group of musicians.”

Heidi and Ryan currently reside in Somerset with their two children, three year old Angelina and one year old Jonah.  The couple, who met at the age of sixteen at McCreary County’s annual Blazin’ Bluegrass Festival, clicked immediately, and Ryan joined the band shortly after the two met.  Two years later, the couple married.

When asked about the group being called a “trio” but consisting of more than three members, Ryan laughed.

“We’re getting ready to change the name to “Heidi & Ryan’s Kentucky Mountain Trio,” he said with a grin.  “That will finally make the group “mathematically correct!”

Heidi, with help from her uncle, began playing the guitar at the age of fourteen.  She never thought about the fiddle until she taught herself.

“It was hard,” she recalled.  “However, I know I was meant to play the fiddle.  The fiddle is the instrument that comes the most natural to me.”

As husband and wife, Heidi and Ryan perform and practice together extensively.

“We get a lot of compliments from people who notice our ability to blend,” Heidi remarked.  “Ryan has remarkable harmony.  He knows exactly what I’m going to do.”

Currently, the group performs mostly bluegrass and gospel.  However, Heidi is quick to point out that she grew up with a lot of country, and Ryan started out playing drums in a Rock-n-Roll band.

“When you hear certain bands or singers perform, you automatically recognize them,” Ryan remarked.  “We want to develop our own distinct sound and style so people will know it is us as soon as they hear us perform.”

When asked where they would like to end up in the future, Heidi smiled shyly.

“I want our music to take us as far as it can,” she replied.  “I know it sounds clichéd, but my dream is to play at the Grand Ole Opry.”