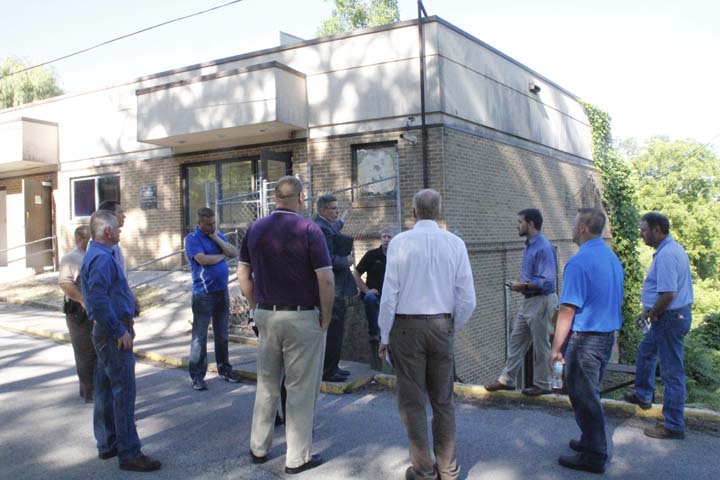 With one word McCreary County’s hopes for reopening the Jail were pretty much dashed.

Kentucky Department of Corrections Commissioner Randy Ballard noted the “deplorable” shape of the old facility, and advised against spending any money to try and repair the building and bringing it up to code.

With the word “deplorable” hanging heavy in the air, all in attendance at the impromptu Thursday morning meeting understood the implications: McCreary County will have to continue to spend hundreds of thousands of dollars on housing inmates in other counties – to the point of possibly bankrupting the County.

Admittedly, there may be a very small chance that the holding cells located inside the courthouse could be used for brief periods, which could save the county money, according to McCreary County Attorney Conley Chaney.

The Commissioner visited the Jail Thursday morning at the request of Magistrate Jason Mann. Mann had contacted Governor Matt Bevin’s office to inquire if there was any possibility of relief for McCreary County, which is struggling with housing inmates.

The Governor’s Office in turn put the Commissioner in touch with Mann, and he agreed to meet with county officials and tour the facility.

Citing the “deplorable shape” of the old McCreary County Jail, Department of Corrections Commissioner Ballard basically ended any and all speculation that the building could possibly be saved and used in any capacity.

He noted, after a brief 20-minute walk-through, that the first thing that needed to be done – if the County were to even consider pursuing repairs – would be to get a structural engineer to examine the building to certify that it was even sound enough for any construction work to begin.

Then, an architect would have to be hired to analyze the building and provide detailed plans for renovation.

“This building was built in 1987, and you’ve done no maintenance,” Ballard said. “If the outside looks like this, imagine what the plumbing and HVAC systems are like.”

Noting the tough financial crisis the County is facing Magistrate Mann asked: “If you were Judge Executive, what would you do?”

“I would not spend $1 on that building,” Commissioner Ballard replied.

Using the analogy of owning an old car that is falling apart but spending money on a new paint job for it, the Commissioner basically said any money spent on the facility would be a waste.

“You are better off to bulldoze this and build a new Jail,” he added.

“If you were going to put $1 million into this building, I would recommend putting it toward a new facility.

When asked if funding was available for building a facility, such as grants, the Commissioner said there were none.

Even if the County were to try to repair the facility, the Commissioner stated changes in Kentucky Administrative Regulations (KAR) would require the County to reopen as a full Jail, not as a “holding” or “life service” facility.

“It’s all or nothing,” Ballard said.

Magistrate Mann inquired about the possibility of converting the Spec Building in Pine Knot into a jail, but was told there is no way that building could fit the physical plant and security requirements.

After touring the facility the Commissioner shared his thoughts, noting there was no bias, and that counties across Kentucky are struggling with jail costs.

“Every Judge Executive from Jackson to Robinson County will tell you the jails are killing them,” he said.

“I know this is contrary to what you want to hear,” he added. “But I am going to tell you the good, the bad and the ugly and it’s up to you to decide what you are going to do.”

Commissioner Ballard said the County could try to contact officials at USP McCreary to see if they could provide assistance, noting the County provides services to the facility.

“You are not going to know if it is possible, but what does it cost to ask?”

He also recommended using the home incarceration program more, and to continue to contact other facilities to seek open beds closer to home.

The costs of housing and transporting prisoners elsewhere is “bankrupting” the County Lominac noted, and wondered what would happen if the County couldn’t pay its bills.

During the discussion Sheriff Randy Waters asked what the County was supposed to do if he made an arrest, but there was no where to take the prisoner.

“The law says it is up to the Judge Executive to provide means to house the prisoners,” Ballard simply replied.

Either building a new Jail, or negotiating a contract with a nearby Jail seems to be the only options left on the table for McCreary County – both of which would cost money the County does not have.

As for a new jail, Ballard noted new regulations require four personnel on duty at all times at a jail, and McCreary County would see payroll expenses of about $750,000 alone to fully staff a facility.

With an average cost of about $35 a day to house a prisoner, and if the County would be able to collect 100 percent of that cost through fees charged to the inmates, it would require an average of more than 58 prisoners to be housed in the facility each day.

While Jailer Hatfield noted the County is averaging about 60 inmates per day already, that cost does not include additional expenses, such as Jailer salary, utilities, maintenance and debt service.

But, if a large enough facility could be built, somehow, bringing back state prisoners, and housing inmates from other counties could ease the financial strain.

According to Chaney, the possibility of hope arose after the Commissioner toured the courthouse cells, used during Circuit and District Court proceedings.

Commissioner Ballard reportedly saw that the cells, two downstairs and one upstairs, did meet standards, and indicated he would speak to his legal counsel to see if the rooms could possibly be used.

The County Attorney noted the cells would not be considered a “holding cell,” as that would not meet state specifications, but could possibly be used as a “booking and transfer station,” which would allow some prisoners to be held a while – possibly until meeting with Pre -Trial Services and making bond arrangements.