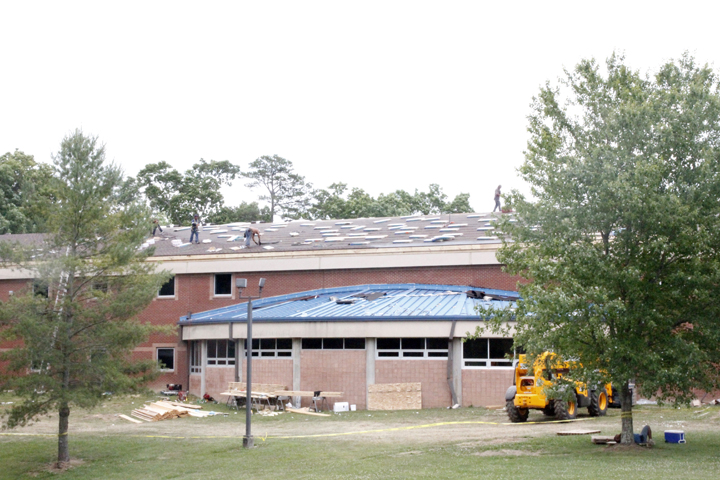 Photo by Greg Bird
Crews have been working through the summer to install a new roof on the Middle School, as well as work being done in every school in the District.

Workers have been scrambling around all five McCreary County school buildings this summer, rushing to complete a major overhaul of the school district’s lighting and heating/ air conditioning systems before the start of school on August 17.

McCreary County Schools Superintendent Mike Cash said Tuesday that work is proceeding as planned, and expects no delays to the expected start date for the 2016-17 school year.

“It looks like everything is on schedule, and in some cases ahead of schedule right now,” Cash said. “We are looking to be able to have open houses in the schools on August 10.

That is not only good news for the District, it also benefits the contractor, CMTA Energy Solutions, as a clause was included in the contract that would penalize the contractor if the project were not completed on time and forced a delay in starting school this fall.

While there may be some minor work remaining to be done after school opens, Cash emphasizes it will not impact the day-to-day operations of the District. Minor tweaks and fixes to the systems and some exterior lighting may need a few extra days to complete, but will all be done after school hours.

The work is part of a nearly $10 million energy-efficiency upgrade plan approved by the Board of Education earlier this year that will drastically reduce energy costs at all District schools and facilities.

The savings realized by the upgrades, will pay for more than 90 percent of the total cost over the next ten years. As an added benefit, the new equipment is expected to be easier to maintain and last a while.

According to Cash the McCreary County School District ranked near the bottom of all districts in Kentucky when it came to energy efficiency prior to the upgrades.

“This is one of the biggest projects the District has seen. We are making changes to every school and most District buildings.”

Work is being done to all five schools and Central Office to upgrade lighting to energy-efficient LED lighting, and changes to the HVAC systems to better control temperature and cost.

When the high school renovation project was begun in 2009 not a lot of work was done to the career/ technical hall, basement and gym heating and air units, so a majority of the focus at that school is bringing those systems up to par with the rest of the school.

In addition to a new roof being installed at the Middle School as part of a separate –but much needed repair project, and a repaving of the bus lane, energy upgrades are being put in place, such as new LED lighting and a new HVAC system to use the same equipment as the other schools.

All schools will also have the HVAC ducting cleaned, removing debris and mold build up, making for more efficient air flow and removing potential health hazards.

There was the possibility of replacing all the old duct work, but with cost and time concerns the Board opted for a thorough cleaning at this time.

Another upside to the large project is the Energy Savings Guarantee offered as part of CMTA’s overall bid.

The company estimates an annual expected utility cost after the work has been completed. If the utility bills exceed that estimate, CMTA will cover the difference at no risk to the school district.

Additionally, the annual savings are expected to offset the cost of the equipment and installation of the new systems.

“Not only will the District save money on energy costs for this point forward, the money that is saved will go toward paying for the equipment,” Cash said. “It will also allow our maintenance personnel more time on other projects instead of having to constantly work on fixing or replacing the old HVAC systems.

Cash added that he hopes to continue to upgrade the facilities as time moves on.

“I have asked the Board to budget some extra money each year to be able to keep doing little projects that will continue to make our schools what they should be.”

Some pending project ideas include security vestibules and beautification efforts.

Another upgrade on the list will be to re-do the track at McCreary Central High School; to make it KHSAA regulation and adding a rubberized surface to enhance usage.

By shortening the track and bringing it up to regulation standards, it will allow the District to add track and field teams to the athletic offerings, complementing the existing cross country program and expanding opportunities for more students to participate in sports.

It will also be a benefit for the citizens who use the track for fitness and social activities Cash explained.

“Plus, a lot of the community use the track after school hours, and this will make it better for them as well,” he said.

With the ongoing projects, and the recent completion of a new softball complex, renovations at the MCHS Baseball field and last year’s roof replacement project at PKI, the District has spent more than $11 million on needed repairs in an effort to make the schools a more welcoming place.

“I think it makes a difference to our students when they walk in to a school that looks clean, and taken care of, instead of run down and dingy,” Cash said.

The work being done in the District hasn’t gone unnoticed in Frankfort either. Last month Kentucky Department of Education Commissioner Stephen Pruitt recognized the McCreary County School District and Superintendent Mike Cash in his June 20th email to all school districts.

In the “Superintendents Spotlight” Commissioner Pruitt highlighted the improvements being made to the District’s facilities.

“In terms of facilities, McCreary County has made significant improvements,” the Commissioner said. “Over the past year, the District has built a new softball complex, renovated the high school baseball field, replaced the roof on the intermediate school and updated internet connectivity by installing new Wi-Fi ports in all district schools and the central office. Currently, several schools are benefiting from a complete HVAC overhaul this summer, which will lower energy costs for the District in the years to come.”

The Commissioner also recognized Cash’s charge in focusing on accountability and leadership to improve academic achievement.

“McCreary County has placed an emphasis on data-driven planning and decision-making,” Pruitt stated. “This past fall, Superintendent Cash organized a leadership retreat, in cooperation with the Southeast/South-Central Educational Cooperative, where principals and teachers disaggregated assessment data and made plans for the 2015-16 school year.”