“To serve and protect.”

That is the policeman’s motto and there was no better example of local officers living up to the mantra than Saturday afternoon when they intervened on an apparent suicide attempt in Whitley City. 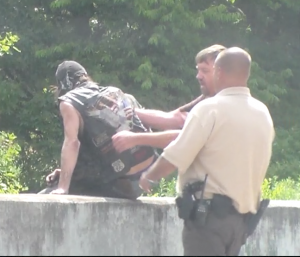 Dashcam footage courtesy MCSO
Sheriff Randy Waters and Deputy Tommy Lewis grab a man off a railroad bridge before he could hurt himself Saturday afternoon.

According to Sheriff Randy Waters, Deputies Mike Tapley and Tommy Lewis were on patrol around 3:30 p.m. Saturday afternoon when they spotted a subject perched dangerously on the bridge over the railroad tracks on north 1651 near the Ranger Station.

The deputies called out to the subject who told them to “stay away” and that he was planning to jump.

The officers immediately called for back up and began a lengthy discussion with the man – keeping their distance so as not to provoke the subject into jumping.

Railroad traffic was suspended throughout the duration of the event.

A short while later Sheriff Waters arrived on scene, and being familiar with the subject, took over negotiations.

“We wanted him to remain calm,” the Sheriff said. “He was sitting so close to the edge we were afraid any sudden movements from anyone could cause him to go over. We didn’t want that, so we just talked.”

The Sheriff stated the man admitted he was on drugs, and “the meth was killing him,” so there was real concern he would jump.

As the negotiations continued, Sheriff Waters began to slowly approach the subject, keeping him distracted.

“I told him to tell me when to stop, and he never did,” Waters said.

As the Sheriff neared the subject, Deputy Lewis was cautiously approaching from behind and to the left of the man.

When both officers were close enough, Sheriff Waters reached out and grabbed the man by the back of his jacket, while Deputy Lewis wrapped his arms around the subject and together they pulled him off of the ledge and onto the bridge.

The man was transported by McCreary County EMS for medical evaluation.

“It’s always a good day when a situation like that ends up with a life being saved,” Sheriff Waters said. “I hope now he can get the help he needs.”

“It just shows how badly drugs can get a hold of you and make you do things you normally wouldn’t do.”

Assisting at the scene were Deputies Tom Smith and Charles Perry, members of the U.S. Park Service and McCreary County EMS.