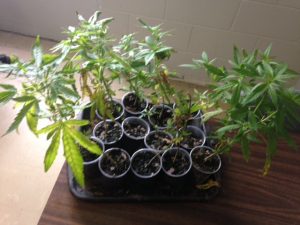 Deputy Odell Smith stated he, along with Deputies Charles Perry and Cecil Powers, had received information regarding a possible illegal grow operation at a residence on Inman Neal Road in Stearns.

Smith said he located the plants and was conducting an undercover investigation late Monday, when a disturbance at a nearby residence required law enforcement to intervene, alerting the suspects.

While no arrests have been made Deputy Smith states suspects in the case have been identified and charges are pending.

A total of 13 marijuana plants were confiscated.

The investigation is ongoing.